The Agent was an unnamed operative, bodyguard, and assassin seemingly in the employment of Chief Kakuzawa and was introduced just before the assault on Maple House. Though her initial appearance has Kakuzawa referring to her as male, the Agent was female, and there are clues as to her true gender peppered throughout the chapters in which she appears.

The Agent first appeared during a meeting between Chief Kakuzawa and Nousou, where she held the latter at gunpoint for his insubordination. She and Nousou traded remarks until Kakuzawa told them to stop. Later, the Agent joined Nousou, three of the viable Mariko clones, and Diclonius Research Institute-allied soldiers during their raid on the Maple House. During the altercation, she shot Kouta when he threatened Nousou with a gun, filling Nyu with enough fury that her horns grew to enormous lengths and she developed her vectors. She killed every soldier in the room save for Nousou, the Agent, Alicia, and Barbara, but after they had retreated outside, Lucy woke up and followed them. When Lucy was distracted with Nousou, Barbara, and Alicia, the latter of whom she killed, the Agent used a dying Cynthia to knock off one of Lucy's horns to stop her attack after Lucy seemingly crushed Nousou and Barbara. Though she was interrupted by Kurama taking Cynthia's barely living torso from her, thinking her to be Mariko, she thoroughly subdued Lucy by shooting off her other horn and took her to the Diclonius Research Institute and Kakuzawa.

Presumably, after defeating Lucy but before taking her back to Kakuzawa, the Agent warned Nousou not to release Barbara from the mind control device keeping her docile, but he didn't heed to her words and was killed by the clone. The Agent was later revealed to be one of two undercover spies sent by the Japanese government to investigate Kakuzawa, his research facility, and learn about his secret agenda. She was to obtain every bit of information she could find regarding the Diclonius Virus, especially any potential research on an Anti-Diclonius vaccine, which they very were uncertain even existed. It seems likely she was told by her real superiors to obey Kakuzawa in capturing instead of killing Lucy to keep her true mission secret.

The Agent was on the island containing the Diclonius Research Institute when Nyu/Lucy confronted Chief Kakuzawa and during the subsequent uprising of the Clone Diclonii. She protected Arakawa during her efforts to save the Vaccine. At one point, she corrected Arakawa's foolish release of Diana, the last of Nousou's four successful Mariko clones, from her mind-control device. The Agent seemingly sacrificed her life to get Arakawa safely away, which later enabled the scientist to recover the vaccine. In the final chapter, readers learned that she and Anna Kakuzawa survived on a tiny fragment of the now destroyed facility's sunken island.

The Agent was dedicated to her job and was willing to do cruel things to serve the greater good and keep from blowing her cover. She was an innate survivor, living through being stuck on a sinking island full of enraged Diclonii. She used whatever weapons were at hand, from the Mariko clones, Cynthia and Diana, to guns and even a poison spike firing crossbow used by the vicious Unknown Man and later by Bando. She also suggested that she and Anna Kakuzawa eat the monster shell of the former mutated body while they awaited possible rescue. She was able to be cool and collected in front of others but tends to fall apart when she was alone emotionally. She was a combatant of immense skill and determination, facing down hundreds of Diclonius even as she realized the effort was unsustainable. She was also perhaps the only person, and indeed the only human, in the entire series to successfully subdue Lucy through force alone without special powers or a hostage. 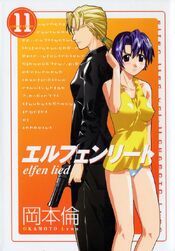 Agent and Arakawa in color on the cover of Volume Eleven. 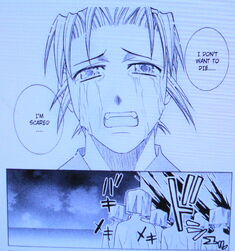 Is The Agent doomed?