Anti-Diclonius Technology is a term covering the many methods and devices used by Humans, primarily scientists and researchers under the employ of the Diclonius Research Institute, to contain, control, and kill members of the Diclonius race, seen as a threat to the Human population of Earth in the Elfen Lied series. Throughout the story, Humans utilized several types of technology while seeking to capture or kill Diclonii. Some of the gadgets were simply low-tech, while most of the others were involved in what can only be called "super-science." Many of these methods are proven futile when facing more than a single Diclonius and are often completely worthless when facing their queen: Lucy.

Known to have been used on Lucy, Mariko, and her viable clones, Alicia, Barbara, Cynthia, and Diana. Their exact effect is unknown, but it is likely they are used to give the Diclonius wearing it a sense of entrapment and to keep the researchers from feeling sympathy for their young female charges. Despite depriving the Diclonii of their direct sensory input, it didn't seem to hinder Lucy's rampage during her escape from the Diclonius Research Institute, and also saved her life when struck in the head by a sniper's bullet. Perhaps Lucy used her vectors to see her surroundings in the same way that blind people use walking canes. That could explain the helmet's complete failure in limiting Lucy's ability to escape and kill any guards in her way. It is possible that it simply served as a layer of disorientation for a captured Diclonius. Lucy and Mariko wore theirs only while in captivity. The clones wore theirs both at the facility and during the invasion of the Maple House. The bags worn by the rejected Mariko Clone Diclonii may have served a similar purpose, but no evidence exists for it. It is more likely the bags on their heads were more to hide their possibly disfigured faces from the researchers.

Seen in use against Lucy and Mariko, owing to their massive power levels as compared to others of their kind. They kept people and objects outside of the projected range of their vectors. Owing to her power being the strongest of all, Mariko's personal containment unit was further locked inside a separate vault, wherein her powerful vectors actually became visible. The clone Diclonii were also kept locked up, but their minds, unfocused until just before the end of their lives, could not aid them in unifying to break out. Upon being unleashed, their power (aided unknowingly by a powerful burst from Lucy) was strong enough to destroy the ultimate containment unit, the island facility itself.

While Bando made use of and survived on bionic replacements, the Diclonius Silpelit, Number 28, went through a living hell in her last days, attached to a life-support system that kept her upper torso alive for use as a biological tracking device for other Diclonii. Mercifully, the Unknown Man, who hurt and used her in this way was so unpredictable, he threw a fit that finally killed her shortly after this task was done.

A form of such device definitely not to the benefit of the recipient were the control devices implanted in the skulls of Mariko clones Alicia, Barbara, Cynthia and Diana, as well as the one and only known example of a Male Diclonius.

Another type of device is embedded in the body of a Diclonius, as with the bombs that were implanted into Mariko. It is unknown if any other Diclonii were controlled in this manner. It can be assumed that since the Japanese government's own agents seized all the Kakuzawas' available materials, the tech that once kept Number 28 alive was used to keep Bando alive at the end of the series.

The lower-tech solution was often the most reliable, and many more Diclonii died under a hail of bullets than almost any other method. However, while almost any caliber of standard attack bullet would kill a Diclonius in the same way as a non-horned human, this only worked out if they did not see the attack coming. In a true pitched battle, bullets of .50AE Caliber (made with tungsten steel), or .50BMG, often stood the only chance of working, since their weight and density meant that a Diclonius could not simply brush them aside. Only an experienced soldier fighting a Diclonius could teach this, and this experience often came sadly at high cost for both sides. The Diclonii's ability to use their surroundings as offense and defense made even this method at least a bit iffy. A bullet doesn't necessarily need to kill a Diclonius to stop them--simply breaking one or both horns is usually enough to place them in a coma--the exception being Lucy, whose horns regenerated and who reverted to her gentler Nyu personality on more than one occasion.

Bando's prostheses in both manga and anime are very advanced compared to present-day technology. In his last battle with Lucy, Bando stunned all by actually dodging the invisible vectors she attacked him with. While he was always a superior hand to hand combatant, and claimed to have learned to feel the vibrations in the air when the vectors rose, it is possible that his cybernetic replacement organs aided him in this astounding feat.

This was a crossbow that did not fire standard crossbow bolts, but rather poisoned, spiked barbed balls that were too heavy for a Diclonius to turn back at a close range, and whose sharp edges and toxic coating prevented easy removal of the projectile. In the series, this was utilized by the vicious Unknown Man, Bando, and the female Agent who used one to turn back a group of Clone Diclonii. Bando was able to pull a projectile out of himself with his artificial hand, while Lucy survived by using her vectors to pull it out with great effort. The lowest level of tech in the series proved the most reliable of all, but it was known to have flaws just as much as any other method, such as certain rare individuals being able to pull the small missiles out and the poison losing its potency if the ball was re-used.

The Vector Attack Craft was developed from the harvested spinal cords and brains of the Clone Diclonii, and while useful against them, it proved less so against its true target: Lucy. Whether they, or an improved model of them, came to be useful in the brief, but intensely bloody conflict between the Diclonii and humanity that followed in the months after the deaths of Lucy and Chief Kakuzawa is not known. One of the crafts did rescue Arakawa and the anti-Diclonius Birth Vaccine as the clones rose up and sank the island.

The ultimate biological weapon against the Diclonius proved to be one never used directly against them at all: A vaccine jointly by Professor Kakuzawa and Arakawa to prevent men from siring Diclonius children, even after infection. This vaccine put an end to Diclonius births worldwide, and thus, their threat to humanity. 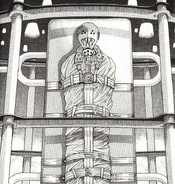 Lucy in her containment unit with her helmet (manga).

Lucy in a containment unit (manga).

Lucy in a containment unit (anime).

One of Mariko's clones and the control device that keeps her docile. 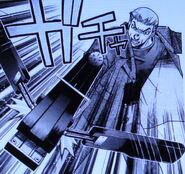 A collectible keychain made to look like the restraint helmet.
Community content is available under CC-BY-SA unless otherwise noted.
Advertisement