Doctor Arakawa is a research scientist and the assistant of Professor Kakuzawa in his Diclonius experiments. Though she first appeared as a comic relief character, her role in the story grew exceedingly important as the story went on, and the moral conflicts she has to face place her in a pivotal role regarding the fate of humankind.

As a child, Arakawa wished to be the next Marie Curie and spent all her time studying rather than partake in other facets of teenage life and young adulthood such as dating and socializing in general. As a result, she lacked a social life. After earning her PhD., she took a position at Kamakura University, where she resented Professor Kakuzawa for working her relentlessly and often treating her like a gopher.

Returning to the university after running some errands, she discovered Kouta, who had previously left the amnesiac Nyu in Kakuzawa's custody after he claimed to be her relative but thought better of it and returned to retrieve her. In one of his lower-level labs, they found the professor's corpse, courtesy of Lucy. Without his wig, his severed head's horns were in plain sight, confusing both Arakawa and Kouta. For Arakawa especially, this was baffling since she believed their research was an attempt to create a vaccine against a vaguely-defined plague that gave people horns. Swearing Kouta to secrecy, she sent him away so she could contact Chief Kakuzawa's people and get the mess covered up. She was soon after taken to an underground grotto located beneath the island housing the Diclonius Research Institute and pressed into the direct service of Kakuzawa himself.

When Kakuzawa demanded to know who was the second witness to his son's horns, Arakawa claimed she could not recall the witness's face or name and was shot by him for her answer. The wound wasn't fatal, however, and she was given medical attention in exchange for her assistance in using Professor Kakuzawa's research to create a potent strain of the Diclonius virus for genocidal purposes against non-horned humans. While creating this virus strain as commanded, she secretly worked on the Vaccine as well. She was worked like a slave and verbally abused by Chief Kakuzawa, and also had to deal with unsavory types like the Unknown Man, with whom she foolishly made a sexual wager. Despite this, she began to see successfully completing this research as her ticket to the kind of recognition she felt she deserved while also subverting the Kakuzawas' agenda. While she was ordered to find Kouta's identity intending to snuff out this other witness, she stopped searching for Kouta after a while for working on the virus and its vaccine.

Discovery of the Maple House

A chance encounter at the university occurred between her, Kouta, Nyu, and Yuka when she returned to find some of the late Professor's notes as well as try to beat the Unknown Man in a quest to find and capture Lucy. Arakawa nearly walked past the three without incident until she remembered Kouta's face and made the mistake of taking Nyu hostage to get information. While Nyu did not become Lucy, Arakawa panicked when Kouta pointed out just who she was holding, helped by Nyu's regrowing horns slightly peeking out of her hair, and the trio escaped. When Kouta returned later to try and find the missing Nyu, Arakawa chastised him again of the nature of Diclonii. Despite her sympathy for him, she followed him home and gave Kakuzawa's agents the location of the Maple House, which eventually led to its assault. Her stated reasons were scientific: if Lucy remained out and about, her research into a vaccine was rendered worthless by the volatile presence of the Diclonius Queen. Soon after, Lucy was returned to the island facility while Arakawa completed the vaccine. One or both of these factors seemed to cause an uprising among the myriad of Mariko clones kept in one of the sub-levels, as well as Lucy's rage and then visible vectors tearing an enormous hole through the many layers of the island facility.

Arakawa was not at the heart of the facility when the clones found and took their revenge on the vast majority of the personnel present; it seems unlikely that any of them made it out or off the island. Found and rescued by the Agent, the pair faced terrible odds, aided only by the Agent's resourcefulness and determination, and then by the recovery of the last viable Mariko clone, Diana. Arakawa nearly undid this by disabling Diana's controls, which would have unleashed her real and quite vicious personality. The Agent quickly restored the checks on her behavior, and Diana tore through the other clones until she was herself killed. Even though they believed the vaccine lost, the Agent knew the importance of getting Arakawa off the island to eventually recreate it and seemingly sacrificed her life to get her back to the helicopter that brought her to the isle. Even this seemed a vain hope as the clones were everywhere, and the Diclonii had destroyed the helicopter when Arakawa found it. The arrival of a Vector Attack Craft saved her and enabled her to get off the island.

Held by operatives who had taken command of the JSDF First Escort Fleet, Arakawa first fully realized that she and those she worked with were responsible for a pending apocalypse. Trying to make amends, she realized from fleet scans of clone Diclonii activity on the island that the Anti-Diclonius Birth Vaccine, which she thought to have lost as she fled, was still intact. With the aid of the Vector Attack Craft, she retrieved the case with the vaccine. From a safe distance aboard a fleet vessel, she watched Lucy escape as the island sank, and found herself almost mourning Chief Kakuzawa, wondering about a world in which no horned people of any type had been born. Once back at mainland Japan, she was hustled out of Kamakura, which was soon to be the site of Lucy's final battles.

She perfected the vaccine samples, and gave them to the Japanese government's Anti-Diclonius branch, Saseba, saving the human race from extinction. Kouta observed in the finale that Arakawa still didn't seem happy, despite the incredible praise and adulation she now had. Implied in Kouta's closing narrative is that the moral and ethical choices she made haunted her and made her reject the very fame that had always been her dream.

Because of the shortened length of the anime plot, Arakawa's plot ends with her first seeing Chief Kakuzawa's horns; she does not learn his master plan onscreen. Shortly before this, however, she does find Kouta's picture and his student file, but shoves the file into her pocket so as to avoid giving his data to Kakuzawa and potentially cause his death.

Arakawa with the Agent on the cover of Volume 11. 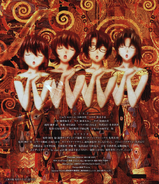 The back of the Japanese Blu-Ray boxset cover featuring Arakawa, Yuka, Mayu, and Shirakawa.