Bando, when first introduced, is an operative for the National Police Agency's Special Assault Team (SAT). His combat skills, bloodlust, and almost single-minded determination made him one of its top agents. He was usually highly apathetic, sadistic, aggressive, and decidedly anti-social, but primarily driven by his personal sense of honor and obligation.

Sent out in pursuit of the recently-escaped Lucy, Bando and the S.A.T team were transported to Kamakura. In transit, Bando demanded another agent trade with him to take the beachfront area. Finding Lucy while her Nyu personality was dominant, Bando attacked. First, he knocked Yuka and a protesting Kouta unconscious, then attempted to engage Nyu in battle. However, Nyu didn't give him the fight he was seeking. Instead, she looked confused and terrified. Out of disgust for this supposedly "vicious killer" not turning out how he hoped, Bando ordered his junior partner, Satou, to kill her instead after he struck her in the head.

Lucy woke up from the blow and brutally killed Satou as she realized the situation. After the murder of Satou, she and Bando fought, with Bando trying to shoot at her and getting all manner of projectiles thrown at him in return. Bando held his own rather well against her, figuring out almost immediately how to best use her 2-meter range against her, but he didn't count on her using the gun she lifted from Satou's corpse. Surprised his target was shooting at him now; Bando lost the upper hand to Lucy, as well as his actual right hand. She then broke his left arm and gouged out his eyes, taunting him the entire time. Fortunately for him, Lucy reverted to Nyu and fled, leaving him enraged in his helplessness. The then-homeless Mayu saw him and tended to his wounds the best she could before going to call an ambulance for him.

After being told by Kurama and Kakuzawa he would need to be castrated to prevent his infection by Lucy's vectors resulting in horned children, he desperately tried to find some alternatives since he feared the removal of his testicles and therefore a drop in testosterone would only hinder his fight against Lucy. After an awkward encounter with Nyu outside of the college attended by Kouta and Yuka, Bando heard the opinion of Professor Kakuzawa but rejected what he correctly saw as the insane pro-Diclonius agenda the Professor put forward. Determined to take vengeance on Lucy for what she did to him, he agreed to undergo operations to replace his eyes and arm with cybernetic parts but drew the line at efforts to castrate him to prevent any more Diclonius births. Escaping the Doctor's office with the partial connivance of Isobe, he used his soon to be revoked SAT membership to build up his ammo before and focused his time and resources on a rematch with Lucy. In the meantime, he made alliances (to widely varying degrees) with Lucy's enemies: Nana and Kurama. Allying with them placed him in a pivotal role in their struggle against Mariko, Kurama's daughter. At one point, Bando stopped the despondent Kurama from committing suicide after Mariko's death, even caring for him while he recuperated. It also seems that he got in touch with Saseba while tending to Kurama's health.

He slowly developed a somewhat friendly relationship of a sort with Mayu, who he grudgingly came to accept while maintaining his gruff exterior. Mayu even called on him to rescue her and Nana from the sexual predation of the Unknown Man, but their relationship nearly ended when he learned that Mayu had lied to him about Lucy/Nyu living with her in the Maple House. Seeking his forgiveness, Mayu was caught up in a battle on the beach between Bando, Lucy, and the Unknown Man. Bando, having cleared the beach of debris to remove any potential weapons for Lucy, again held his own against the diclonius and somehow dodged both direct attacks from Lucy's vectors and many of her most ingenious indirect attacks by feeling for vibrations in the air. He also made good use of the crossbow he seized from Unknown Man to place Lucy firmly on the defensive for once. This crossbow would once again turn up in possession of Saseba's agent inside Kakuzawa's organization.

When Mayu's memories of Lucy's dismemberment of Nana returned, Lucy was implied to be ready and willing to kill her and even appeared to attempt it, only for Bando to take the blow. Lucy ripped off his remaining arm, sliced him in half, then fled the scene. As he died in Mayu's arms, Bando reflected on a long-held wish he had for someone to cry and mourn over him; a dream thought unlikely since he isolated himself from society his whole life. In his memory, Mayu continued cleaning the beach where Bando lived.

The last chapter reveals that Bando is alive, as he approaches Mayu on the beach and arrogantly tells her there was no way he could die while she tearfully runs to him and embraces him. A close-up shot of his foot and lower torso indicates resuscitation through the use of bionics and prostheses, but the series offers no precise explanation. It's possible Kurama's connections aided in this.

Mayu's feelings for Bando were romantic in nature, but it's not clear if Bando saw her as anything more than a kid, making it more likely his view of their relationship was more platonic/parental. He reciprocated her feelings enough to humor her in letting her express her feelings.

In the anime's final episodes, Bando allied with Kurama through a deal to repair his cybernetics, damaged in battle with Nana, in exchange for killing Mariko. Mariko was taken away by Isobe and his men before Bando arrived, and instead, he targeted Lucy, seeking revenge, since she was still at the scene with Kouta. Episode 13's beginning scenes show Bando survived another (off-screen) defeat at Lucy's hands, with the Diclonius Queen claiming he will never see her again before leaving him to tend to his wounds. Due to the anime's brevity, he and Mayu don't interact much after their reunion on the beach where Mayu discovers he's targeting Nyu, and thus do not reach the point where Mayu develops feelings for him. Instead, he maintains a barely amiable "the enemy of my enemy is my friend" relationship with Nana.

From his first appearance onward, Bando's personality was very distinct. He was unrepentantly sadistic, bloodthirsty, aggressive, arrogant, and uncaring toward others, and had no problem pulling a gun on someone if they're an obstacle in his way. He ached for a good fight more than anything, first demanding he be allowed to shoot real people in the VR training room and later reveling in the chance to fight someone like Lucy who can keep him on his toes. His humiliating and debilitating defeat at Lucy's hands sucked him into a selfish desire for vengeance against her for the rest of the series, and he went out of his way to prepare for his next match against her so he would win.

Despite his brutish behavior and lust for blood, Bando had a softer side. He begrudgingly grew closer to Mayu and, to a lesser extent, Nana, and took care of Kurama after his mental breakdown following Mariko's death. He went to Mayu's defense immediately when he knew she was under attack by the Unknown Man and beat the predator black and blue for his heinous actions toward a child. He then tended to Nana's wounds, removing the neurotoxin-laced spike balls embedded in her body. He again saved Mayu from being killed by Lucy, getting his body torn in half in the process.

Bando also wished to settle down and have children of his own. This dream ended not only when he discovered Lucy infected him with the Diclonius Virus with her vectors during their fight, ensuring any of his children would have horns, but later on when she cut him in half, costing him his lower body and ability to reproduce. His knowledge he could never have children could have prompted him to develop an almost paternal relationship with Mayu. 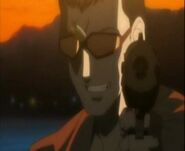 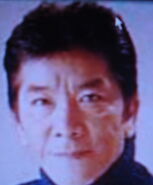