Closing song for the Elfen Lied anime, played during the credits

Be Your Girl is the ending theme of the anime. It is performed by Chieko Kawabe, composed by Daisuke Kato, and lyrics written by Megumi Hyuuga.

In the final episode, it is played and then a brief wrap-up sequence follows. It is a romantic ballad that, in keeping with the other music associated with the series, expresses the sad feelings of Lucy towards Kouta, lamenting a love that can never be because of her actions. The anime sequence is rendered by Rin Shin for ARMS Corporation after the paintings of Gustav Klimt. 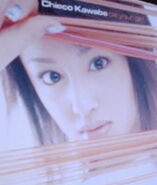 The single of the song
Community content is available under CC-BY-SA unless otherwise noted.
Advertisement