Chief/Director Kakuzawa is the series' main antagonist. He is in charge of the research facility where young Diclonius Silpelits, and Lucy, "the Queen," are taken and often subject to brutal experimentation. His apparent and public goal was to contain the Diclonius threat, thus gaining support and cooperation from the government of Japan. In reality, he wished and strove for the opposite - to bring about the dominance of the Diclonii over the humans. Kakuzawa had three known children. The elder son was active in the research project hierarchy and was very much in the same personality mold as him. A daughter, Anna, who lacked the family tendency to possess genius-level acumen in science and business; she was raised to believe she was inferior as a result. Finally, a youngest known son, born of his rape of Lucy's mother, who was one of the only known male Diclonius, who was along with Lucy one of the keys to his dream of reawakening the power in his family line. Depicted as a fanatic, the Chief was willing to sacrifice anyone, including himself to achieve his goal. His personal authority was vast, allowing him access to Japan's elite Special Assault Team, something usually reserved for the Prime Minister. Even when ultimately thwarted on a personal level, his plans and schemes would later haunt the world by causing a destructive war.

Kakuzawa's family for generations held to clan myths about a genetic mutation in their line which causes a bone disorder causing a cranial condition resembling Diclonii horns. This tale told that they were descendants of demons (because of their horns) and that once the family was "pure demon" and wielded vast supernatural powers, which was diluted by intermarriage with non-horned humans. After their bloodline had become diluted, they were driven off their land and hunted down by non-horned humans, a situation Kakuzawa likened to the fate of the Neanderthals. The hunted Kakuzawas migrated to an underground cave, at the bottom of a small island, situated off the coast of the actual Kamakura, to survive. The site became a holy place, where they prayed for the arrival of a Messiah - a pureblood 'demon' who would restore the mighty power of the Kakuzawas.

After the appearance of a horned race in modern times, Kakuzawa thought he now had absolute proof regarding the stories about his ancestors. Completely believing this race was the same as his, he used Homo Diclonius (Two Horned) to describe both. He founded, with some government aid (it is unclear the extent to which the government of Japan supported or had control over him, but they were anxious to hide it) a facility meant to study and control Diclonii. In particular, he was fascinated with the bloodline that produced the Queen, who he concluded was the long awaited Messiah of his kind. It was he who gave Lucy her moniker (different from her real name of Kaede), taking inspiration from the fossilized remains of an ancient Australopithecus woman whose DNA strains exist in all Human groups to this day. At the time of the manga's original publication, Fossil Lucy was seen as a kind of mitochondrial Eve, since he intended her to be 'mother' of a new race.

He built the Diclonius Research Institute on the island that once hid and housed his persecuted ancestors. How closely this construction followed the emergence of the modern Diclonius is not known, though it seems possible the Chief altered an existing structure or had plans to rapidly build such a facility in case his family's beliefs seemed set to come to pass.

To learn the origin of Lucy the Queen, he searched for her parents. After discovering that Lucy's mother had the ability to give birth to fully-reproductive Diclonii, Chief Kakuzawa worked hard to produce more Queen-level Diclonius. Only one Diclonius was born from this, a fully reproductive male, born from Kakuzawa's rape of his and Lucy's mother, shortly before her suicide. Despite dissection of her reproductive organs, attempts at insemination and other methods, the boy remained the only result.

Kakuzawa and his family developed a eugenics project, with the goal to build a New Humanity, made of only pure diclonii, and destroy the 'old foolish' Humanity. The Chief divided the project into two steps: the first was to spread the Diclonius virus on a global scale. While achieved, this goal failed by way of the vaccine that ironically his son began developing to have control over the Diclonius. The second was to make Lucy the Queen, be the Mitochondrial Eve of the new Humanity.

His daughter, Anna, lacked the family's genius-level intellect as well as their mark of superiority, horns. Still striving to be useful to him, Anna agreed to endure experiments on herself, and seemingly became a monstrously-sized globe-like creature in which form she could compute impossibly complex, detailed sets of probabilities involving her father's plans, but was forced to float in the underground lake due to her mass. She became the Lebensborn Oracle. Despite the pain involved, she was happy to serve her father. Kakuzawa believed that he had created a Goddess.

After three years, Lucy managed to flee from the Diclonius Research Institute. The next day, Director Kurama immediately sends SAT to Kamakura, to locate and strike down Lucy, but the mission fails. After learning that Kurama ordered Lucy killed rather than captured, Chief Kakuzawa warns him to use other methods. Despite a paternal affection, Kurama then sends Nana, the only Diclonius Silpelit managed without threat, to find Lucy, by using her "Diclonius Telepathy," but again the re-capture fails, ending with the brutal dismemberment of Nana.

Seeing her as useless, Chief Kakuzawa orders Kurama to kill Nana, knowing of their affection. But Kurama disobeys and releases Nana. Chief Kakuzawa, intending to make Kurama pay for his disobedience, orders Shirakawa to send Silpelit # 35. # 35 is Kurama's real daughter, sent out to re-capture Lucy, and if the chance arose, to kill Nana.

In the end, Kakuzawa recaptured Lucy and revealed his master plan to her. Lucy rejected it all, saying he had believed a myth about his family, that Diclonius were Human after all and then finally killing both him and her half-brother by him, feeling that their bloodline must die. Lucy also seemingly killed Anna, who admitted she knew her family was not truly Diclonius, but who allowed her father to keep his delusion to the end. Slowly destroyed amidst the bombardment of the island and hundreds of angry Diclonius girls, the Chief's legacy met an ignominious end. Only Anna, who had survived and whose monster form was only a shell containing her real body, survived of all the family. The Chief's headless body washed out to sea on the island where he thought he would remake the world sank beneath the waves.

Chief Kakuzawa shared the immense hatred the majority of his family felt for non-horned Humans, a trait that first developed because of the discrimination his clan suffered for ages.

He was an utter psychopath and fanatic, using anyone, including his children, to accomplish the dominance of the Diclonii.

He was also a frigid man, almost inhuman, not feeling any remorse for killing people, raping women, and even using his children. He would personally shoot and kill others by his hand. For example, he had virtually no discernible reaction to the death of his eldest son. Once, merely to prove a point, he shot through his hand.

Despite his psychopathic personality, Kakuzawa was a very intellectual, cultured and intelligent person, a trait shared by his family, to prove themselves superior to Humans.

However, the Chief was gentle towards his daughter Anna, telling her that, just because she didn't have horns, that wouldn't make her dumb, only that she learned slowly. When he radically transformed her into a giant monster, to give her precognitive powers, he firmly believed that he had made her a Goddess. But even then, the globe-like form was not her real body, but a mere shell that had grown around it. It seems that he made it this way, to not let it damage her original body, but it's also possible that there was no other way, or that he needed a fail-safe to control her with, should the need arise.

The Chief had an immense fixation on the Judaeo-Christian/Western Monotheistic Biblical story of Genesis, and he firmly believed that being the father of the 'New Adam' would in effect, make him the one true God, displacing the original in the minds of the new dominant race to come. Like his belief that his and Lucy's people were of the same species, his fixation appears to have blinded him to the notion that trying to displace God and Humanity would in effect make him Lucifer. 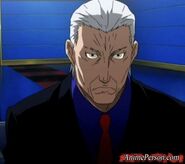 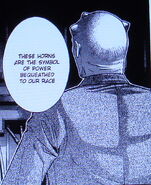 Horns revealed manga, look like 3 instead of 2 from this shot 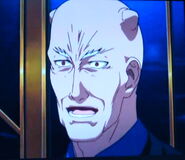