Cynthia was one of four wholly viable clones of Mariko bred by Nousou at the Diclonius Research Institute and controlled with a device that rendered her docile and childlike.

Cynthia is one of the clones accompanying Nousou during the assault on the Maple House. She was ordered to seize Lucy, who was then in her Nyu personality in addition to disabling Nana. She was split above the waist when Nyu, witnessing Kouta's shooting, gained the ability to use vectors outside of her Lucy personality. As she was dying, the Agent used her in a successful attack on a reawakened Lucy, which leads to her recapture. Her death made Nousou realize that these girls meant something to him. A deranged Kurama seized her upper body from the Agent and clung onto it due to his grief over Mariko's death. Cynthia briefly called him, "Papa," before finally passing away, which increased his madness even further. Nana later found him with Cynthia's mangled corpse and buried her remains.

Vector Range: up to 10m (according to Nousou) 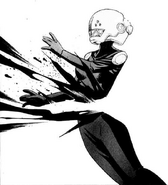