To influence Lucy, eventually to such a degree it did not need to speak; eventually to actually control Lucy's body, even against her will. Possibly linked to other Diclonius

Appeared to Lucy as identical to herself as a child, no description how or if it appeared to Nana or Barbara

To keep Lucy focused on exterminating and replacing Humanity, and to keep her alive in order to do this

Status at end of series

The DNA Voice ( DNAの声 ) also known as "The Voice" is the supposed driving force behind the Diclonius attempt to replace non-horned humans as the Earth's dominant species. It is arguably the real antagonist of the series.

When Lucy/Kaede was still a child at the orphanage near Kamakura, she began to feel her future vectors manifest themselves, and also began to hear a voice urging her to take vengeance on those who delighted in tormenting and even betraying her. After the bullies killed her puppy and were killed by her in return, young Lucy unconsciously fell to the whims of the voice's murderous will, resulting in her entire killing families for a place to stay even as she befriended Kouta. After Kouta's seeming betrayal of her trust, Lucy surrendered entirely to the will of this voice, resulting in the murder of Kouta's sister and father. Over the next five years, she engaged in a stealth campaign, using her vectors to cause fatal heart problems in some Kamakura residents while infecting the fertile young males with the Diclonius virus, causing their children to be born with horns and vectors. The voice's hold on her during this period was likely unyielding, as she committed these acts without much apprehension and later admits to following its commands. Given that The Voice said it would help her make a place for itself, it's possible her stealth campaign was part of its plan. The Voice may well have been her only companion mentally during her three-year imprisonment.

Many times, Lucy's freely chosen actions were hard to distinguish from those The Voice might urge her to. It only seemed to speak up directly when she did something that ran contrary to what most doubtless saw as Lucy's vicious nature, such as its constant dialogue with her during the later chapters of the manga. Lucy told Kouta during their meeting at the end of the manga that the voice could not force her to give in to its demands and only suggested what to do, but not long after this the Voice actively seized control of her body to stop Kurama from killing her.

While she mostly went along with its commands, Lucy openly defied the voice on two notable occasions after a long period of almost blindly taking its advice. Once came five years after her murder of Kouta's family, when she met and befriended Aiko Takada. The other came at the very end of Lucy's life when she chose to heal Kouta rather than destroy the world, even though this also meant the destruction of her body's integrity. In other instances, the struggle was more muddled and the outcome less certain either way.

When told of the DNA Voice's existence by Lucy, Kouta harshly dismissed it as something all people struggle with every day. Very soon after this conversation, the Voice seized control of Lucy and attacked Kurama when Lucy refused to defend herself, this to keep a promise made to Kouta. After both the Lucy and Nyu personalities had fled their dying body, Nana felt a persona that was neither, or they take over the melted remains, though it apparently never spoke to her. In rage and agony, the Voice killed the last squad of soldiers sent after them, and halted when the pain of the disintegrating body proved too much, but still intent on destroying the world before it died. Nyu and Lucy's spirits protected Kouta and their friends from the Voice so that Kouta could kill their body once and for all, but to the Voice's shock, he proved unable to do it. The Voice at last found the pain so great, it pleaded with Kouta to end the body's life so it too could die, and out of mercy, love, and revenge, he complied.

Genetic Entity? Or The Creation of A Miserable Child?

It isn't clear whether or not The Voice is a genetic trait shared by all Diclonii aside from just Lucy, or if it is a product of the torture most Diclonius individuals ends up subjected to during their lives. Nana heard a voice like this one when despondent over leaving her 'Papa' Kurama and taunted by Bando as having no place in this world; she briefly sought to kill him and everyone else. Later, after the viable Mariko clone named Barbara had been freed from an infantile state of control by Nousou, whom she then killed, she pursued Nana, seeing her as a traitor for living happily among humans. During the confrontation, she chastised Nana, asking why she wasn't heeding The Voice's directions since she must surely hear it.

While the actions of many Diclonii towards humans would seem to indicate an innate drive to kill, other factors mitigate the starkness of these seemingly automatic killing sprees. One such factor is the age that most Diclonii gain their vectors. Aside from Lucy, other Diclonii (only Silpelits at this point) first develop their vectors at around age three. Any child of this age using such destructive power would result in bloodshed, especially since toddlers are incapable of realizing the scope and gravity of their actions against the people around them. Another factor would be their treatment by their families as they grew. Silpelit children are fast-aging, looking almost twice as old physically as their real age so that they would stand out in any environment. The treatment they could receive from their families and immediate society could range from abandonment to a wary acceptance of their horns, making mistreatment a possibility. It is arguable that these children need no drive to kill since a lack of understanding of their abilities plus potential abuse makes them apt to lash out in any event. Lucy certainly felt this urge to kill and replace humanity with her kind, sometimes stronger than others, but it's possible that due to the trauma and betrayals she faced, she suffered a schizophrenic breakdown and merely imagined what she considered a true 'DNA Voice' in the midst of her incredible mental pain. The Voice could have been a manifestation of her desire to make sense of the abuse she faced, providing an explanation for it all by saying she's not human and can remake the world with more people like her.

Nana and Barbara seemed to be able to hear this voice as well, which could potentially be explained by a DNA link. Similar to how Diclonii can sense the presences and even feel the emotions of other members of their species, it's likely Lucy could have telepathically broadcast her pain and rage out to others like her. However, this is unlikely since the dominant personality of Lucy's body was Nyuu during the times the other Diclonii experienced it, and Nyu has been noted not to possess a "Diclonius Aura," so to speak, like Lucy does. As suggested above, it's more likely all three experienced The Voice as a means of coping with the suffering they're dealt by humans and is a manifestation of their wish for vengeance. Supporting this is the tendency of The Voice to appear during times of alienation and suffering when the Diclonius feels they have no place in the world. To young Lucy, this grim feeling was the final acceptance of something she fought against her whole life. To Nana, it was a shock and surprise to a girl who thought of Kurama as defining her place in the world, but she regained and even supplemented this feeling when she became part of Maple House, only moving to violence when threats arose to her new home and family or Kurama. To Barbara, the alienation is reversed; she is happy to be a non-human, feeling that they and Diclonii who hold with them must be destroyed, and loudly shrugs off the idea that she should have some connection with her genetic father, Kurama.

The hold the DNA Voice has on individual Diclonii differs from one to the other, however. Kurama was able to kill Barbara with a gunshot he's almost sure she predicted, which can lead one to believe that despite her claim of hating humans, she rejected its orders to kill the genetic father she never really knew. When Nana nearly gave in to it while facing Bando, pain and the realization she was bleeding forced her out of its control. Lucy, despite giving in to its orders without much contest during her younger years, shows plenty of resistance to it as she comes to realize it's been the source of much of her misery. When she refused to kill people anymore, by her promise with Kouta at the Sea Candle, the Voice had to take over her body personally to keep her from dying thanks to Kurama. It had to forcibly take over again as she lay dying too since neither Lucy nor Nyuu's personalities were dominant at the time and it wished to see the destruction of humanity done. Nyuu's resistance of the Voice's will was the strongest. Even while being held captive by Chief Kakuzawa, she staunchly rejected the idea he tried to posit about her having no place with humans. Nyuu's use of her vectors was only ever in use as a defense, or lashing out as a result of her emotions and pain.

In the manga's finale, Kouta offers up an account of the Diclonii War that emerged from the plans of the late Chief Kakuzawa, but we see no mention of an inborn voice driving the Diclonii. If the Voice ever existed outside of an individual level, then either it moved on to these girls as they rose up, or it died with Lucy's body, regardless of whether it was real genetic instinct or her broadcasted pain. That raises the unanswerable question of whether these Silpelits during the war ran on this instinct or were wilder and more unfocused in their attacks because they had no guidance. 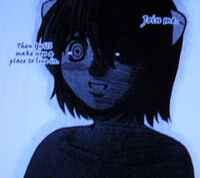 In her despair, she listens...

Is Nana hearing the same voice?

Lucy tries to explain it all to an angry Kouta 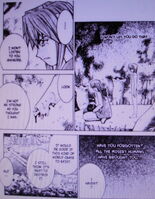 To save Kouta, Lucy rejects the voice once and for all.
Community content is available under CC-BY-SA unless otherwise noted.
Advertisement