Throughout entire series, both manga and anime

Varies in the manga, uniformly pinkish-red in anime

Status at end of series

Likely extinct, with some possible qualifiers

The Diclonius are a newly evolved species, arising from and very similar to normal Humans, but possessing psychokinetic abilities far beyond any Human. For reasons that may be cultural as well as biological, they are often at odds with Humans to the point of threatening to replace them as Earth's dominant sentient species.

While Lucy was indeed the first and 'Queen' Diclonius, her late mother was the source of the mutation that birthed the virus in her children. Lucy's birth fulfilled the messianic expectations of the well-heeled and highly positioned Kakuzawa clan, some whose family members possessed a genetic mutation that gave them vestigial horns. Despite this, their cult-like beliefs, and the world-shaking steps taken on behalf of Diclonius supremacy by Chief Kakuzawa, the two groups were unrelated. Sadly, the treatment of the Kakuzawas in feudal Japan and their reaction to it would foreshadow the relations of Humans with the actual Diclonii centuries later, including the ironic way the family treated Diclonius individuals in modern times. Chief Kakuzawa also believed that the Diclonius were the Oni (Demons within Japanese Mythology) meant to surpass and replace Humans when their messiah was born.

Mentioned in Episode 3 or 4, Diclonius appeared before Lucy's birth. However, none before her were capable of reproducing, and many died in infancy. This idea seems to be an anime-only assertion not present in the original manga. Check here for a fuller explanation.

The differences that separate Diclonii from humans are both internal and external. The most noticeable difference is their horns on the parietal section of their skulls. Most often, these horns resemble cat ears from certain angles. In older chapters of the manga, the horns resembled elf ears but as the mangaka's art style kept fluctuating they slowly took on a more cat-like appearance until that remained their shape for the rest of the series and in the Anime adaptation. These horns are a mixture of bone and cartilage. The manga states that Diclonii falls into a temporary coma if they lose one of their horns, and would never return from their lethargic state if they lose both horns. However, Lucy's horns grew back twice: within a matter of months for the first time, then over several days the second time.

Another notable difference between them and humans are their hair and eye colors, though this difference varies from manga to anime. In the manga, Diclonii possesses hair colors of many different shades, from pink to purple to blonde. On colored art, Lucy, Nana, and Mariko all have green eyes but it is unknown if this applies to all other Diclonii. In the anime, however, their hair colors are more unified, being a variety of pink hues. Likewise, their eye colors are variants of red that can range from very dark red to pink. This design change from manga to anime was most likely chosen to make them seem more obviously aliens from humans.

Inwardly, they differ from humans at their pineal gland. Normally, the pineal body is the size of a pea and located in the center of the brain between the two hemispheres, but for a diclonius, it's the size of an egg and wedged against the frontal lobe. The pineal gland appears to be the source of their vectors since Diclonii have had their vectors disabled in series by way of Nana prodding the front of their skull with her vectors and by the mind control devices implanted by the Diclonius Research Institute's scientists. These vectors resemble hands, but cannot be seen, touched, or otherwise acted upon by outside forces (aside from instances in the anime where vector-on-vector grappling takes place). Vectors spread the Diclonius Virus to humans via touch, and they can manipulate objects, act as shields by decelerating projectiles, and slice through things, giving them the potential to be massively destructive if used offensively. Against humans, they are almost always lethal. Their vectors usually have a limited range of a few meters. Lucy's can extend to two meters, and while Nana, Mariko, and her clones are shown to have either more vectors or greater average range, Lucy's raw power became robust enough to threaten the world. Ultimately, using her vectors to world-destroying capacity compromised her body's integrity until it fell apart.

Diclonii have the innate ability to detect one another, such as when Kurama released Nana from the offshore laboratory to search for and retrieve Lucy. Even this ability had limits, as she could not sense her target when she was in her childlike Nyu personality, nor could she sense the Mariko clones when they were under the control restraints placed upon them by Nousou and the Agent during their assault on Maple House. Likewise, Nyu's presence could not be sensed by other Diclonii.

Diclonius are quite intelligent. However, the Diclonius are also just as emotional as Humans, often more so. Once they reach the brink of sanity, some hear a voice that claims to be the directing voice of their DNA, urging them to kill as many Humans as possible.

The diclonius race possesses two distinctive tiers in-series: Queens and Silpelits. The primary difference between these types is that one can reproduce and the other cannot.

Those that can't breed are called Silpelits. Referred to as "worker bees," they use their vectors to infect Humans with the Diclonius genetic virus on and turn these children into Silpelits when they are born. Silpelits age much faster than humans, with their bodies looking twice as old as their actual age, and their vectors tend to be longer than those of the Queen caste.

The Queen type, of which Lucy is presently the only member, can reproduce sexually. Additionally, they age like normal humans and appear to have shorter vector ranges. However, since Lucy is the only Queen, it's inconclusive if her vectors are short due to her caste or if they're an individual factor.

There are no male Diclonii in the series aside from Lucy's half-brother. Since he was not a Silpelit, was capable of reproduction, and male, it's unclear if he would count as a Queen or another new sort entirely. Following the analogy to bees, a likely name for his caste could be Drone.

It is said by some in-story that God chose the Diclonii as the new Humanity, born with the drive to destroy the Human race and repopulate the world. In the final episode of the anime, Lucy tells Kouta that she was born to kill Humans, an idea cemented by her third personality born from the supposed instinct to kill Humans all Diclonii are said to have. However, Nana's character, as well as the incidents surrounding Lucy’s past and relations with Kouta, suggests that it is possible for Diclonii to have empathy towards Humans and that their sadistic characteristics develop as a result of their interactions with the world. Barbara, a clone of Mariko, claimed to have also heard this voice, but hers was a personality shaped by birth and life in a lab. Nana once seemed to sense it but at that time was in shock from leaving Kurama, taunted by Bando as to her lack of a place in the world.

The homicidal tendencies are possibly a result of an unstable psyche, itself a result of congenital recessive mutations, aggravated to such high levels by inhumane treatment from Humans. Through the run of the series, the question arises to the audience of whether the Diclonii's homicidal tendencies are an innate drive to eradicate Humans, or if, like any "normal" Human child, they develop this drive in response to years of trauma and abuse. Their destructive behavior is only ever directed towards ordinary Humans, as they behave benevolently towards animals. This split is possibly exemplified in the anime when a young Diclonius is shown killing a Human for laughing at her, but when the Human's dog bites her hand, she reacts by crying instead of harming the dog. However, the anecdote mentioned above is only in the anime in a story told by Professor Kakuzawa, whose trustworthiness is questionable at best.

Diclonius children suffer massive discrimination (infants often euthanized on the spot) by other Humans, and the series makes it unclear whether the often murderous hostility Diclonii show as well is innate or the result of the hatred and contempt shown against them.

Researchers at both the Kakuzawa facility and the government-controlled facility believed the Diclonii to be a serious threat to the Human race and kept them in isolation. When Kurama's daughter Mariko is born as a Diclonius, he remembered an incident in which an escaped Silpelit touched him with her vectors. At this point, he realized that this explained his daughter's condition and the sudden surge of Diclonius births. With Diclonii passing on their DNA to humans, the infected parents have horned children, which would gradually lead to the Diclonius race replacing humans as the planet's dominant species. Lucy mentions the danger to the Human race to Kouta in the final episode, stating she could make sure more Diclonii are born than humans in just five years if she put forth the effort.

Anatomy and Physiology in Elfen Lied vs. real-life

In real life, the pineal gland produces a chemical called melatonin, which is involved with circadian rhythms and causes drowsiness. However, the once mysterious pineal gland has been used in science fiction to explain psychic powers dating back to the early 20th century and the works of HP Lovecraft. 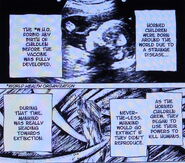