Tangential to non-existent
Elfen Lied Ancillary Works describes pieces that have no direct or indirect connection with the world of Elfen Lied, yet still evoke its name in some broad fashion.

Part of a fantasy novel series that deals with actual elves, each one with a title that begins with "Elfen --- ." The author is German, and the full series has only been published in the original German, though the first book has been translated worldwide. A possible connection to the works of Lynn Okamoto might still exist, as the manga series is very popular in Germany.

The international bestseller and epic adventure

A fierce and merciless demon has been unleashed on the world, spreading destruction and bloodshed in both the human and the elven realms. Northlander Jarl Mandred witnesses the ruthless attack on his men, and he seeks vengeance with the help of the elf queen, Emerelle. Despite Mandred’s barbaric human nature, the queen orchestrates an elfhunt joined by the two strongest warriors in Albenmark to pursue the beast. Farodin, the fiercest fighter in the land, and Nuramon, the healer, seize the opportunity to make history alongside Mandred in a life-defining series of battles waged in parallel universes.

The Elven is an epic tale, bringing heroes together across the boundaries of their worlds to avenge past losses and influence fates yet to be decided.

Elfen Lied (a few books later in the series)

In the world of elves, the fox-headed Lutin are deemed a nation of cut-purses, liars and cheaters. Nevertheless, it is possible for the young Ganda Silverhand to be chosen by the Elfen Queen Emerelle as her confidant and advisor. What Emerelle has no idea of is that Ganda is among the leaders of a resistance group against the rule of the elves. As Ganda participated as one of the closest advisers of Troll ruler in the overthrow of the queen, she encounters an incredible conspiracy, one that could change the albums Mark even more profoundly than the war between elves and trolls. It is a secret that has already killed her father and her mother. But Ganda is a Lutin - stubborn and courageous. So she's soon caught up in a dangerous adventure that will determine forever the fate of all peoples albums Marks ...

"Elfen Lied" stands beside the other novellas about the secret Gandas, a cycle of poems, which tells the life of Blütenfee Moonbloom, with an extensive illustrated section, and a timeline of the most important events from Bernhard Hennen’s Great Elves saga.

A short work that may have once been a prototype for the Elfen Lied series we know. It had no science fiction or fantasy elements, instead focusing on two musical prodigies, who face the pressures of growing up to overcome their fears and realize their dreams. It was featured as a bonus chapter in Elfen Lied Tankōbon Volume Five and again in a collection of shorts by Lynn Okamoto called Flip Flap. It has yet to be translated into English, but a summary can be found here.

Elfenlied of the Country of Time by Bandai

Elfenlied of the Country of Time ( 時の国のエルフェンリート ) is a video game published on November 29th, 1997 by Bandai, playable on the Windows 95 operating system. The video game was originally planned by Lynn Okamoto himself and he was the leading member of the development project team from the very beginning. The game title was determined by Okamoto. Other major members includes Taraku Uon, the character designer for anime/game series such as Please Teacher!, Please Twins!, and Read or Die.

The game's plot revolves around the player helping one of three fairies, Pianyi, Apricot, or Licorice, become a goddess named Iris through training and upbringing. The player can only choose one of the three fairies to begin with, but two more fairies become optional for play later in the game as incarnations of the first three.

When you help the chosen fairy in the first stage grow properly, then she is reincarnated as one of the two fairies in the second stage. And when you again properly help her grow, she is then reincarnated as the final fairy, Iris, the sixth fairy. The remaining task is to help Iris grow. When she is well raised and educated, then she changes the goddess of the Country of the Time.

This makes it similar to the widely popular Bandai game Tamagotchi, as the point is to care for a living being as they go through life cycles. For this game, the life cycles are the transitions from fairy to goddess.

Due to the characters present being fairies, it appears the developers translated "Elfenlied" as "Fairy Song," a legitimate translation since "elf" can refer to an elf or a fairy in German. This makes the fully translated English title "Fairy Song of the Country of Time."

Originally titled Daishikkin Helena ( 大失禁へレナ, Large Incontinence Helena ) in Japanese, this is a sexually explicit OVA about two elf princesses named Helena and Theodora of Burgundia, who make a harsh deal with their evil conqueror. Unsurprisingly, he doesn't keep to his end of the deal, and, even more unsurprising, is named Uranus.

The English title appears to have been chosen solely to make purchasers think of a connection to Elfen Lied, a la the direct-to-video 'mockbusters' of popular films. The original Japanese title can make one think it caters to an audience preferring "waste"-related fetishes, but instead, it appears to be based on the philosophical idea of incontinence, which refers to a lack of self-control in regards to sexual desire.

The novel Elfen Lied, from an unrelated fantasy series 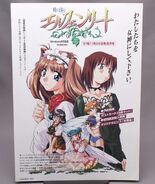 Elfenlied of the Country of Time (1997) by Bandai

Art for Elfenlied of the Country of Time 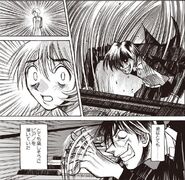 A page from the Elfen Lied short story

NSFW is a vast and deep understatement
Community content is available under CC-BY-SA unless otherwise noted.
Advertisement