Elfen Lied Merchandise has been available to fans of the series since not long after its publication as a manga, and television broadcast as an anime series. However, due to a lack of officially licensed merchandise, many pieces out on the market are fan-made or were made well after the series' initial run. For this article, unless accompanied by some manner of separate collectible, DVD and Blu-Ray sets will not be counted here, nor will manga compilations unless they are of collectible note.

Though the official soundtrack releases have been few and far between, fans are fond of collecting the anime series' memorable music tracks and have also expressed interest in recordings of the original Elfenlied poem and song. These are available in iterations official and otherwise. Due to the immense popularity of Lilium as the central theme of the series, it has seen many covers since the anime completed its run.

There are extremely rare PVC figures of Nyu and Nana, having interchangeable accessory heads (Grim Lucy and Smiling Nyu; Nana with and without the 'hairband' tie given her by Kurama), with Nana sporting her pink hair from the anime instead of her purple manga hair. These can easily fetch above One Thousand USD on Ebay if they appear at all, and sellers are unwilling to sell them for less, if at all. To date, only the Nyuu and Nana figures have been produced by an officially licensed manufacturer, with no figurines existing of any other characters in the series, and Wave, the manufacturer, no longer sells them.

Music boxes like the kind present in the anime that play the Lilium song are a favorite item for fans to reproduce, sought after by many. However, due to how large the musical mechanism would have to be to play more than a few seconds of Lilium, music boxes that play 30 notes or play more than one minute of the tune can be very expensive. The price can also vary depending on the materials used to make the box itself both inside and out.

As with many other fandoms, dedicated fans will take to dressing as their favorite character - the most prominent in this case being Lucy or Nyu. Two main types of costume seem to be immediately prevalent. One is Lucy in her skirt and strap-top. The other is 'Jester' Nyu with a large 'joker' hat covering her horns with a red blouse and a yellow skirt - although Lucy was seen in this dress as well. These vary in price, mainly depending on the level of detail, and seem to be entirely fan-made. Horns, of course, are another prominent cosplay item, again varying in quality and price.

Memorable scenes, iconic imagery, and art of every stripe relating to Elfen Lied, including all the characters, are available to the consumer ranging from the humorous to the deadly serious, much like the series itself, usually in the form of T-Shirts.

This category involves clocks, cloth or poster prints, electronic signs, and even lamps decorated with imagery from the series, which can range from happy and peaceful to dark and horrifying.

There are numerous pins, wallet-type holders, charms, pendants, watches, candy or cigarette cases, and notably, a keychain in the shape of the Diclonius Helmet, as seen at various points in the series. All of these items contain imagery related to the series.

By far the oddest and, to many, controversial pieces of Elfen Lied merchandise are cases for body pillows depicting Nyuu, Nana, and Mayu in minimal clothing/nightwear. Considering the use body pillows can have, the choice to make somewhat sexualized pillow cases of these characters is questionable, especially since Nana and Mayu, in particular, are underage and, while 18 in the anime, Nyu still has the mentality of a toddler.

Mayu and Wanta in an odd advert for Lucky Strike cigarettes

Nana's PVC figure only has one interchangeable part (her hair), and unlike the Lucy figure, Nana cannot be removed from her stand, as she would fall over. 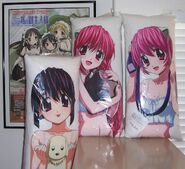 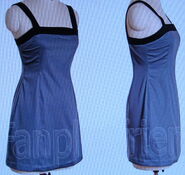 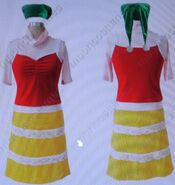