Elfen Lied Tankōbon Volume Three is the third collection of the Elfen Lied manga series written and illustrated by Lynn Okamoto, published by Shueisha, and released in Japan on February 19th, 2003. The cover features Wanta and Mayu, still dressed in the clothes she wore when she fled her abusive family.

It makes of up the third and final part of the first omnibus volume published by Dark Horse Comics released on May 22nd, 2019 in North America. 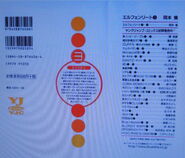 The One Who Has Freedom
Community content is available under CC-BY-SA unless otherwise noted.
Advertisement