Elfen Lied Tankōbon Volume Four is the fourth collection of the Elfen Lied manga series written and illustrated by Lynn Okamoto, published by Shueisha, and released in Japan on May 19th, 2003. The cover features a color manga shot of Nana, revealing her manga hair color to be bluish-purple, unlike the pink it is shown to be in the anime.

It makes of up the first part of the second omnibus volume published by Dark Horse Comics released on September 25th, 2019 in North America.

"This is the fourth Tankobon comic book of Elfen Lied. Every time a new comic book is released, I am seriously worrying about the possibility that nobody is going to buy my book. But thanks to readers like you who have actually this book in your hand, I could continue the story until now. Although this manga is as clunky as ever, It would be big pleasure, if this could gain your favor. See you next time." 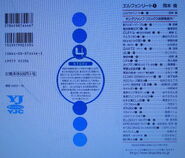 A jade stone, given to young Lucy/Nyu by young Kouta

Volume afterword from the author