Elfen Lied Tankōbon Volume Five is the fifth collection of the Elfen Lied manga series written and illustrated by Lynn Okamoto, published by Shueisha, and released in Japan on August 19th, 2003. The cover features Nozomi, who is introduced in this volume.

It makes of up the second part of the second omnibus volume published by Dark Horse Comics released on September 25th, 2019 in North America.

"It has passed one year since starting the serial manga EL. This is for me the shortest one year I have ever had in my life. Hopefully you will continuously be connected with me, which would be my big pleasure. I would also like to express my sincere thanks for those of you who sent a e-mail or a letter and I'm awfully sorry for not being able to write you back a reply. I just want you to know that I'm really happy for those messages. Wishing that I will see you again in the next Tankobon comic. See you then."

On The Run With Common Front

What Shan't Be Seen 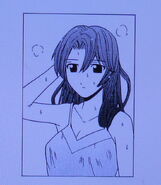