Elfen Lied Tankōbon Volume Eight is the eighth collection of the Elfen Lied manga series written and illustrated by Lynn Okamoto, published by Shueisha, and released in Japan on July 16th, 2004. The cover features Anna Kakuzawa, introduced in this volume.

It makes of up the second part of the third omnibus volume published by Dark Horse Comics released on February 4th, 2020 in North America. 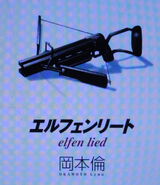 The spiked-ball firing crossbow used by the sadistic Unknown Man

What are you Searching For? 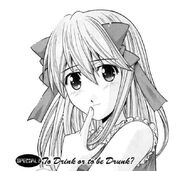 To Drink Or To Be Drunk

Here's to you, dear Anna-chan, for a dream you could never have...

A volume afterword by the author
Community content is available under CC-BY-SA unless otherwise noted.
Advertisement