Elfen Lied Tankōbon Volume Nine is the ninth volume of the Elfen Lied manga series written and illustrated by Lynn Okamoto, published by Shueisha, and released in Japan on October 19th, 2004. The cover features Bando, whose penultimate appearances are in this volume.

It makes of up the third and final part of the third omnibus volume published by Dark Horse Comics released on February 4th, 2020 in North America.

"The Elfen Lied story has now reached its 9th volume.

With support and help of various people, the anime version has started and DVD version has also been on sale. This story seems to have the fortune to be blessed with happiness, which I never expected when I started it.

When I was thinking about the story development alone at midnight in a quiet room, it occasionally happened that a good story did not pop into my head, while the deadline was almost approaching. In such a case, I got quite antsy and had delusions that there were only two persons, myself and the guy in charge of me at the publisher, in this entire world who seriously think about this manga. That made me more lonely.

However, when the after-(voice) recording of Episode 1 of the anime finished and when I observed all the staff members involved and all the voice actors gathered, I felt that it was just a delusion that there were only two persons who thought about this story. That made me almost cry with a joy.

I also feel very happy to know that there are people who favor this story, when I get warm supportive messages from readers.

The story is going to reach the most important part of it from now on. I determined the ending well before starting this manga. I would be glad if you read this through to the end."

Can Life Merely Be Despair? 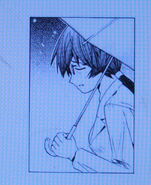 A remorseful Arakawa, having revealed the location of Maple House to Chief Kakuzawa