The Heckler & Koch MP5-A4 is a weapon used both in the Elfen Lied manga and anime series, but most especially the latter, a favored weapon of both the short-lived security forces from the Diclonius Research Institute and the late-episode members of the Special Assault Team. This weapon proved effective when surprising a single attacking Diclonius but much less so when facing down Lucy.

It is a sub-machine gun developed in Germany in the 1960's, and widely used by special, security and secret forces throughout the world.

H&K MP5 is used by most special forces units, especially in the United States, Germany, and around 38 other countries, due to its compactness, and firepower at close range. Although useful for clearing corners, and CQB operations, due to the fact that it chambers 9mm ammunition (commonly used in pistols), the MP5 is not optimal for penetration, hence why Lucy's vectors could easily stop them.

Lucy's slender build raises questions about the recoil, if any, from this weapon. However, even if the recoil were significant, it seems possible and even likely that Lucy's vectors aided her in aiming and steadying the weapon. This seems particularly true as she utilized a movie-style one-handed strafing technique when taking on Bando.

When Bandou & Satou first hunt Lucy on the beaches at Kamakura, they are seen equipped with the MP5, using its gun-butt to knock out Kouta and Yuka while threatening the uncomprehending Nyu. Obeying Bando's threat-backed orders, Satou prepares to execute Nyu with it when she proves not to be the threat that Bando was relishing facing. When the awakened Lucy then rips Satou to pieces, Bando attempts to target Lucy, only to have at one point Lucy take Satou's weapon and have sport with Bando before cornering him for torture and dismemberment.

Besides its use by security forces and other SAT members, Bando makes use of it with the optional attachment of an M203 grenade launcher when first fighting Lucy.

She doesn't need it - but is happy to use it 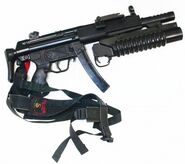