Kisaragi was Kurama's secretary in the island facility that held and experimented on Diclonius, including Lucy. A graduate of the famed and prestigious University of Tokyo, she was undoubtedly very smart and was a good secretary and office lady, but lacked confidence and was very clumsy. She was also extremely devoted to her boss, as is common and even expected of office ladies.

Kurama hired Kisaragi despite the doubts of many other people, and at times, despite doubts held by other staff about Kurama. Kurama kept a picture of her next to the ones of his late wife Hiromi and Nana, whom he considered like his daughter. The affection between the two seemed familial and genuine, much like many relationships between office ladies and their bosses. It was Kisaragi who informed Kurama that his wife Hiromi, pregnant with their daughter Mariko, had been taken to the hospital with birth complications.

During Lucy's escape at the start of the series, Kisaragi accidentally stumbled into a firefight between Lucy and several of the facility's guards. Moments later, Lucy casually rips her head off as Kurama pleads for her life. Kisaragi is later seen in flashbacks set several years before the start of the series. Her death is one of many things that drive the bitter enmity between Lucy and Kurama.

A photo of Kisaragi on Kurama's desk. 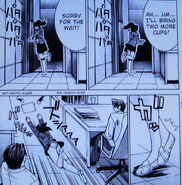 Kisaragi tripping - it will be the death of her yet...

A younger Kisaragi ~5 years prior to story events, just before Mariko was born.

Her hair was shorter then too.