Kurama is the General Director (sometimes referred to as Room Monitor) working at the Diclonius Research Institute under Chief Kakuzawa, recruited by the man's elder son. He is in his mid-30's when the series begins, marked off by the escape of Lucy amid the brutal killings of many facility personnel, including Kurama's secretary. He is a father figure, however flawed, to both Nana and his birth daughter, Mariko, and his actions, whatever his mental state, often have their protection in mind. Eventually, the mad plans of his employers force him to a harsh realization and some even tougher choices, to the point it threatens his sanity. Whatever his alliances, he unrelentingly views Lucy as the number one threat to Humankind and the world itself.

Kurama was a young man when he achieved his doctorate. His wife was Hiromi Kurama, whose constitution did not allow her to conceive children easily. He was recruited by his colleague, Kakuzawa, with the promise of handling the next stage of human evolution, and joined Japan's National Research Institute for Human Evolution. While recognizing the need Kakuzawa stated to stop the spread of the syndrome that caused children (mostly girls) to be born with horns, telekinetic powers and a (seeming) ultimate desire to kill their families, he very often raised objections. The manner in which the young girls were treated, particularly in the case of Silpelit Number 3, openly disturbed him. After escaping, Number 3 'thanked'  the man behind the glass, Kurama, by brushing her vectors against his forehead. Since Number 3 was killed immediately after by Professor Kakuzawa, she could not explain her actions. Soon after, his wife announced that they were, at last, expecting a child. After a miscarriage, another attempt, also using in-vitro fertilization, was successful.

At the same time, Kurama's assistant, Oomori, and his wife were also expecting a child. When this girl turned out to be a Diclonius, Oomori pleaded for her life (since Chief Kakuzawa had ordered all such children born after a certain point euthanized) to no avail. Despite knowing the record of horned children turning on their parents, Oomori told his boss it was not a choice a father could make. Kurama offered to take the horrid choice out of Oomori's hands and kill the child himself so that Oomori and his wife could feel blameless. Shattered, Oomori left the Institute, and Kurama continued the practice, wishing to spare others the pain of killing newborns.

Hiromi had to give birth by Caesarean section, and when Kurama saw that their daughter had horns, he realized that #3 had infected him with the touch of her vectors and that this was the method of transmission for all cases of the virus. Having euthanized any number of Diclonius births, Kurama found that he could not kill Mariko, particularly after a plea from his dying wife. In exchange for Mariko's continued life and the expenses of keeping her in captivity and containment, he was to stay away, leaving her in the care of Saito, who came to see herself as a surrogate mother to Mariko. Unknown to most, Saito cemented her bond with Mariko by explaining that Kurama had tried to kill her at birth, not the lengths he had gone to keeping her alive. She also flatly lied and told Mariko her parents never wanted her at all. Whatever his qualms about his job, Kurama now found himself almost bound to the Kakuzawas, and on the surface became a much colder individual.

Discovery and Capture of Lucy

In the next few years, the explosion of both inexplicable heart attacks and Diclonius births in the Kamakura area led Kurama and the younger Kakuzawa to realize that not only was a Diclonius out and about but that this one showed a pattern of intelligence indicating that it was a 'Queen' Diclonius. Murderous incidents from a few year prior revealed the existence of the girl who would be called Lucy. Later on, cornered in a store along with her human friend, Aiko. As Kurama drew a bead on Lucy, Aiko moved her out of the way, taking the bullet instead. Lucy agreed to enter captivity in exchange for Aiko receiving treatment for her wounds. Later, Kurama informed her that Aiko had, in fact, died, leading to a vow of vengeance from Lucy and beginning the long and bitter enmity between them.

During this time, Kurama began a familial relationship with Silpelit #7, called Nana, who came to believe that Kurama was her actual father. Her relative lack of alienation is nearly unique among Diclonius, as a result of this attention. In the wake of Lucy's escape, Kurama was forced to release Nana to aid the pursuit. In her enthusiasm to help her 'papa,' Nana ignored orders and pursued a confrontation with Lucy. This battle ended when Lucy dismembered her, kept from killing her by a unique power in Nana's vectors that disabled Lucy's. Kurama himself retrieved the wounded Nana, punching the taunting Lucy in the face in regard for Nana. However, he states that the pain he inflicted on her is nothing compared to what Nana is suffering at the moment before Lucy escapes.

Ordered to kill Nana, who Chief Kakuzawa now felt was useless, Kurama instead outfitted her with prosthetic limbs that responded to her vectors and were startlingly realistic, often to the point that someone who saw Nana's arms or legs fall off would be shocked. Kurama sent Nana out into the world, hoping she would find her place in it. At this time, knowing the price of defying his boss and learning of Kakuzawa's genocidal secret agenda for Diclonius supremacy from the Chief himself, Kurama left the project and went into hiding. Ironically, despite obeying his instructions for her to avoid Lucy, Nana ended up encountering Lucy living in the Maple House as the amnesiac Nyu.

Kurama entered into an alliance with the former SAT special forces police member Bando, another person who hated Lucy and wished to kill her. In the meantime, Chief Kakuzawa ordered Kurama's subordinate Shirakawa and his personal assistant Isobe to release Kurama's real daughter Mariko from captivity to pursue and capture Lucy. Nana, present on a beach where the copter carrying Mariko passed over, sensed and was sensed by Mariko, and moved to confront her. Isobe was manipulated and then killed by Mariko. Kurama arrived on the scene just as his two 'daughters' were fighting it out, with the massively powered Mariko holding a supreme advantage. While never wishing to hurt Nana, Kurama felt compelled to at last hold his daughter and tell her that he loved her.

Knowing that a military missile strike had targeted their location, Kurama said to Bando to take Nana and run. Nana quickly returned, deciding to die by the side of her 'Papa.' Mariko's vectors protected them all, though Mariko was in an amnesiac state, like Nyu. It was at this time that Nyu, in the company of Kouta, came to the scene looking for Nana. The enthusiasm of the Nyu persona caused her to leap the police barriers and enter the battle scene. When shot, she once again became Lucy and began the battle. Mariko, who regained her memories, started to lose badly to the less powerful but vastly more experienced Lucy as she tried to protect her father. Shirakawa arrived to tell Kurama several things. She had discovered that Kakuzawa planned to launch a missile laced with the Diclonius virus, meant to infect millions in a single stroke. Shirakawa also told him that a series of bombs intended to control Mariko's behavior were inside her body, controlled by a timer that was very near Lucy. She confessed she had done this in part out of love for Kurama, and that she was punishing his child by another woman. Despite the best efforts of Mariko and Shirakawa to recover the remote, Lucy destroyed it and beheaded them both. The bombs in Mariko's body exploded, reducing Lucy to Nyu and taking her horns. Nana persuaded Kurama not to kill her, despite Lucy's central role in Kakuzawa's schemes. The virus-carrying missile exploded, and, to hear Chief Kakuzawa tell it, all went exactly according to his plan, even to Kurama's defection. Nana tells him that she cannot be his daughter because of Mariko, but she vows instead to become his wife.

Kurama, depressed by his inability to be a father to either Mariko or Nana, attempts to commit suicide with a nearby machine gun but is saved by Bandō. Kurama then lives in a small shed on the beach, partially insane from the many losses. He turns up again during the assault on Maple House and is further thrown off when he spots the corpse of Mariko's clone, Cynthia, holding and refusing to leave her remains. Later, Nana finds him, but he shuns her away, still clinging to the clone Mariko, and dismissing Nana as a test subject. When another clone of Mariko, Barbara finds him while pursuing Nana, Kurama tries to embrace her too. She however attacks and threatens him as well. When she is about to finish Nana off, Kurama shoots her in the head, regaining his sanity by at last accepting that Mariko is dead. Moreover, he refers to Nana as an indispensable part of his life, delighting and heartening the young girl and preparing them both for a final confrontation with Lucy.

During the final arc, Kurama once again confronted Lucy on the Sea Candle lighthouse. Despite a vow to Kouta that she would harm no more people, she instinctively tears off his arm when he tries to shoot her. The determined Kurama tries again, but Kouta blocks this and is shot himself. In Lucy's fit of rage upon seeing Kouta shot, there is an explosion due to her power fluxing, and Kurama, thrown from the lighthouse, is saved by Nana catching him while he's in freefall. A later scene shows the two commenting on Lucy's power as Kurama tourniquets his arm stump, and he tells Nana to join her friends, who are heading to the lighthouse as well. He is not directly present for Lucy's death.

The conclusion of the series shows Nana and Kurama before Mariko's grave, with Nana glad that they are now living together (whether this is at Maple House or in a separate residence is not made clear). Kurama tells he must leave and deal with some of the other people involved in Kakuzawa's conspiracy, but that he will return. He seems to dismiss Nana's notion of becoming his wife and having his children as childish nonsense, yet the text leaves that future possibility open. In the manga, there are differences between the English and Japanese on Kurama's last word to Nana at the end of the story. In the most popular English translation, he says "Nana is my ..." and trails off. But in the Japanese he says "ナナ 私は．．．" ("Nana, Watashi wa..."), which could mean "Nana, I..." or "Nana, I am..." depending on whatever he intended to follow it up. This difference in words, while seemingly minor, allows a wide margin of what he could have meant to say afterward.

The story of Kurama in the anime is nearly identical until the final episode. Kurama cradles Mariko in his arms, lamenting his failure to give her the warmth and love she needed in her life. He has the explosives implanted inside her detonated at his command, and he perishes along with his daughter. Right before the explosion, Kurama and Mariko see images flashing of how their life together with Hiromi might have played out if Mariko had been born without horns. Nana mourns the loss of her Papa but learns to live with the grief. 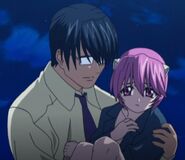 Saying goodbye to Nana in the anime. 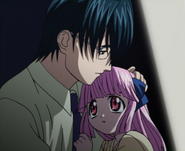 Embracing Mariko as the end comes.

Kurama with Hiromi and Mariko in his dying vision.

Mariko's troubles with learning to ride a bike.

Seeing her off to school.

Young Kurama in the manga.