Mariko ( マリコ; ＭＡＲＩＫＯ ) is the fifty-fifth chapter of the Elfen Lied manga series.

Nana stares wide-eyed at the helicopter passing above her and Bando, sensing another Diclonius aboard it, and realizing that while it is not Lucy, this one is much stronger and possibly more deadly. Fearing that this chopper is here to carry out the execution order Chief Kakuzawa set out for her, Nana at first despairs and turns to Bando, again proposing and begging for an alliance. To him, though, if the being aboard is not Lucy, then he doesn't care, which sends Nana running off crying. Bando, who feels he must conserve his strength and his resources for killing Lucy, is only mildly put off by this. Nana considers her options, realizing that she can't run for fear of the other one sensing her, but that she also doesn't want to give up her new home at Maple House.

Called out by Kouta from her thoughts, she tells him that she cannot return home for the present, and although she cannot say why they exchange a mutual promise to wait for her return. With this resolve in mind, Nana runs off to face the other Diclonius that she sensed.

When the helicopter lands, Isobe disembarks with a wheelchair-bound Mariko, who flashes back to being instructed by Shirakawa that her only objective is to capture Lucy. Any other activity will cause him to use his remote control, bound up in a cell-phone, to activate the bombs inside her body. Shirakawa also mentions that the bombs are on a thirty-minute timer that requires a password input from him, to keep her from killing him or destroying the remote. She has secondary orders to kill Number Seven--Nana--but that her primary objective remains to capture Lucy alive.

In the present, Mariko senses Nana's quick approach, asking permission to kill her, while an exhausted Nana is surprised that her opponent is a seemingly sickly child, but resolves to end the fight quickly nonetheless. Instead, it is Mariko who swiftly and joyfully toys with her, detaching her artificial limbs and stripping her naked, much to her humiliation and embarrassment. 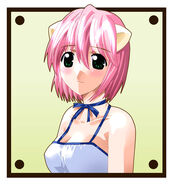 Nana has no idea what she's gotten herself into...
Community content is available under CC-BY-SA unless otherwise noted.
Advertisement