Doctor Nousou was a leading research scientist at the Diclonius Research Institute island facility run by Chief Kakuzawa, and probably the world's leading expert on the biology and physiology of Diclonius.

While he was undeniably brilliant in his field, he was also cold, arrogant, and at times almost as delusional as his employers. Given free rein by the Kakuzawas, he was utterly ruthless and willing to do whatever he felt necessary to gain more knowledge of his subjects, some of whom lived and died under the most nightmarish circumstances imaginable, only to have their spinal columns and other body parts harvested for further examination and experiments after death. In spite of this, he became attached to four of the most viable Mariko clones that he was ordered to create and even gave each one of them a name.

During the assault on the Maple House, Nousou was visibly appalled and angered by the deaths of two of the three clones he brought with him when they were killed or injured in both the lead-up to and during the assault itself. Severely underestimating Lucy and to a lesser extent Nana and even Kouta, the assault team was taken apart, and Nousou was wounded, almost crushed by a falling helicopter. To his shock, Nousou found himself saved by the sacrifice of the clones with him.

Realizing he didn't know whether the clones' loyalty was genuine or not, Nousou, while recovering in the hospital, released Barbara, the remaining clone he brought with him, from his control against the advice of the Agent, who had accompanied him on the raid. Free to speak her mind, Barbara made him brutally aware that not only was she fully aware of everything he did to her and her sisters while in her controlled state, but that she felt nothing but hatred and anger for the way he treated them. In what may have been the only sincere apology of his life, Nousou apologized to Barbara before being decapitated by her.

Nousou was an eccentric scientist. While he possessed the cold demeanor and detachment that isn't uncommon for researchers to develop, especially those in Kakuzawa's employ, he was also very lighthearted about most situations, such as needing the spinal columns of children for research. He was also incredibly arrogant and took great satisfaction in not only incapacitating Nana using the Mariko clones but in taunting her and humiliating her, saying she would be useful for data.

In regards to the Mariko clones, Alicia, Barbara, Cynthia, and Diana, Nousou favored them more than any of the other Diclonii and even held a parental affection toward them. This connection is presumably because, as the most viable of the clones, he viewed them as his personal scientific success since he raised them. He's visibly upset to see them injured or killed, shown first when Cynthia dies, then again when Alicia and Barbara are trying to save them, and Lucy batters Alicia, tearing her body apart, before finally killing her. He even orders the clones to leave him, tears in his eyes, and attack Lucy instead, but the two refuse to drop the helicopter on his trapped body. He tries again to command Barbara to leave him after Alicia's death, but she refuses and instead saves him by shielding him from the rubble of the falling helicopter. Later, Nousou, feeling guilty for his treatment of Barbara and her sisters removes her mind control device in an attempt to talk to the real her. Barbara is not so forgiving of him, however, telling him just how much she hates him for everything he's done to them and decapitates him. Before his death, Nousou finally shows remorse for the way he's treated the Diclonii, though it's not clear if he's merely saying so out of sincerity or in the last chance to appease Barbara before she kills him. Due to his attachment to the clones, it's likely the former.

Oddly, Nousou is almost always shown eating nothing other than Pocky snacks. It's probably this is just part of his eccentric personality, as no one can live solely on such snack foods, although his regular intake of them could explain why he was so high-strung. 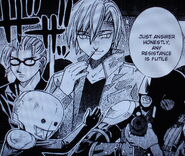 Assault on the Maple Inn 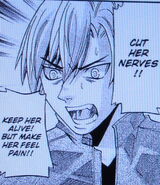 The plan begins to fail
Community content is available under CC-BY-SA unless otherwise noted.
Advertisement