Nozomi is a recurring key character of the Elfen Lied manga series, a young woman of high school age. She is a manga-only character. Gifted with a beautiful singing voice, because of her father, she can't practice singing at home. She is aided and encouraged to pursue her dream by her senpai Yuka, and all the residents of Maple House, where she eventually moves in.

Nozomi is a friend of Yuka's, who met her in high school where Yuka served as Senpai to the nervous Nozomi's kohai. While possessing a beautiful singing voice, her family, most especially her father, forbid her from using it to pursue a career. Her father's efforts even reach abusive extremes. Both Nozomi and her mother possess the Dramatic Soprano (called "Soprano Dramatico" in-series) voice type, (a powerful projecting style) which is said by Nozomi's father to be uncommon for Japanese people. When she was only a small child, Nozomi's mother committed suicide after her voice was ruined, presumably by her oversinging and putting constant stress on her vocal chords. Nozomi's father sought to stop her interest in opera, thus keeping her from suffering the same fate as her mother, through this abuse, which was at least once physical in the form of severe spanking. On other occasions, it was a dismissive angry tone that surely evoked that earlier savage action for Nozomi.

The childhood trauma from her father's abuse lead to her wetting herself whenever she became too nervous, therefore wearing a diaper for her overactive bladder, even up to the time she was invited by a now college-age Yuka to practice at Maple House. This offer, in turn, lead to several awkward encounters with Kouta, whom she develops a secret crush on, and Nyu, who gropes and nearly sexually assaults her (along with everyone else she gropes). Kouta discourages her from thinking herself a coward, even calling it an insult to his friend, being herself, and to him by extension. The 'family' of Maple House delighted in her singing, bringing her joy as well, and slowly increasing her confidence.

Liking the people and atmosphere of Maple House, Nozomi often chose to stay there instead of at her father's home. Presumably, it is the knowledge that Nozomi is staying with her responsible Senpai that allows her controlling father to permit this. It is Nozomi who teaches Nyu how to sing the song Elfenlied. Sometime after the events involving Mariko, Nozomi moved into Maple House on a full-time basis, at last, having reconciled her father to the dream she refused to give up.

Nozomi is among those injured during the invasion of Maple House by forces seeking to recapture Lucy. A soldier forcefully seizes her by the throat when she expresses concern for Yuka. The rest of the series is unclear whether or not this permanently affected her singing voice. During the climactic events of the series, she openly defied her father's wishes to remain in her sick bed and instead rushed to be by the side of Kouta and their friends as Lucy/Nyu is dying. It is possible that, narrative-wise this new strength of character is more important than fully regaining her voice. However, it is not unreasonable to speculate that she regained this as well. In fact, in the final chapter, she was able to talk with Yuka, proving her throat healed and at least her speaking voice returned. Given her closeness to Yuka and the others, it seems likely that she was also close to any children her friends later had. 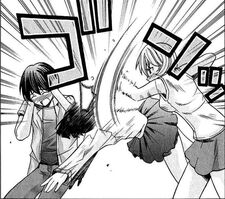 A grateful Nozomi takes a Yuka-blow meant for Kouta 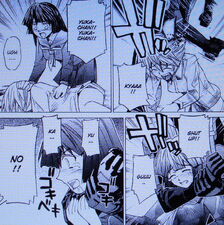 Nozomi during the attack on Maple House 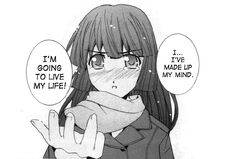 Nozomi at last stands up to her father. 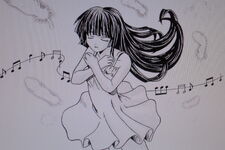 A voice to even touch Lucy's heart.