Number 3 ( 三番 , san-ban ) was a Silpelit brought to the Diclonius Research Institute as an infant or toddler. She was one of a handful to be spared euthanasia only to endure ruthless experimentation instead. Like Aiko Takada, Number 3 is a relatively minor character with disproportionate impact, connecting Kurama, Mariko, Hiromi, and Nana (indirectly), and leading, by way of inference, to the realization of the existence of Lucy.

Number 3 showed intelligence beyond her age, perhaps due to her growth in a hostile environment, and though she was outwardly only a child and appeared just as innocent, inside she was outraged at her cruel confinement and experimentation. While in captivity, she carefully bid her time and hid how strong her vectors truly were despite how much better she would have benefited from using them during the brutal experiments she endured, and all to make her breaking out of her cell that much easier for her and more surprising for her guards.

One day during feeding time, she surprised the guard and scientist who were handling her with her real potential, killing them both. She escaped from her cell and trekked through the hallways, killing other facility personnel, until she reached Kurama's office. After infecting Oomori and lamenting he "wasn't the one," she met Kurama face to face and told him she had wanted to meet "the man behind the glass" and thanked him. Since Kurama was the only facility researcher to show disgust toward the Diclonius' predicament, she decided to spare him from death and infected him with the Diclonius Virus via prodding his forehead with her vectors, like she did Oomori. Right after, she was shot and killed by Professor Kakuzawa with an armor-piercing bullet.

Months later, a horrified Kurama realized Number 3 infected him and Oomori with the virus when his Silpelit child, Mariko, was born. At first, it was believed Oomori was merely unlucky in his wife giving birth to a Diclonius girl, but with his own wife giving birth to one too, Kurama realized the births were connected. Before this, he wondered if there was a connecting factor between the rise in Diclonius births in a particular geographic concentration and time frame, and this new information drove him to conclude there was a "Queen" Diclonius infecting humans and leading to Silpelit births. Among the evidence leading to this conclusion was the fact that Number 3's mother gave birth to Diclonius twins four years after her birth, confirming the existence of an original infecting party. Ultimately, this would lead to the discovery and capture of Lucy which would drive most of the events of the series.

As a Diclonius, Number 3 had several vectors. They were estimated to be about one to three meters long. 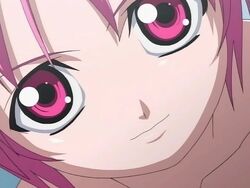 I finally get to meet you. The person behind the glass.