Nyuu Jr. or Little Nyuu is a manga-only character introduced in the final chapter; she's the daughter of Kouta, bears the likeness of Yuka, named for their late friend, Nyu. Though her mother is never mentioned by name, she is virtually identical to Yuka when she was that young, and she mentions her mother getting angry at their being late, which is in character for Yuka.

In the final chapter, after being released from the hospital, Kouta mentions a soon-to-be-lifted birth ban implemented as the world was vaccinated against the Diclonius virus. He is later shown to revisit the spot where he originally met Lucy when they were children, and does so every year at the end of summer. By this point, ten years have passed since Lucy's death, as noted by Kouta, leaving Nyuu to be within 8-10 years of age.

Waiting by the tree with Nyuu, Kouta almost leaves, thinking yet another year has come and gone without seeing Lucy again. Little Nyuu notices a bottle sitting by the grave of the original Lucy's Puppy, and digs it up with her father. Within it, they find a jade stone, a keepsake given to young Lucy by Kouta, and a heartfelt letter written by his old friend, whose true name he learns for the first time was Kaede. Little Nyuu reveals that she has been playing with a pair of twin girls in this same area. The girls soon emerge, stating that they have been waiting for their special friend. The reader does not see them directly in full view, but what is seen (Including hair-ribbons placed like Nyu and Nana once did to hide their horns) indicates that the girls, one of whom is named Kaede, are somehow reincarnations of the innocent Nyuu and the now redeemed Lucy. Little Nyuu looks on at the twins, and Kouta is seen crying tears of joy. 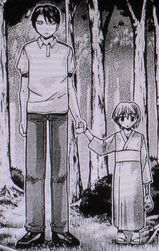 Kouta with Little Nyuu, named for their friend