Professor Kakuzawa is one of the antagonists of the Elfen Lied series. Being Chief Kakuzawa's son, he shared the same goals as those of his father, and likely the rest of his family.

Professor Kakuzawa was a scientist, the son of Diclonius Research Project's head, Chief Kakuzawa, and, like his father, was born with vestigial horns on his head, which led them to believe they were descended from early Diclonii, although they had no telekinetic abilities. It was he who convinced Kurama to join his cause in researching what he called, "the next level of humanity," a pitch he used on many others, including Bando, who rejected the idea. In the flashbacks involving Kurama and the circumstances that would lead to Mariko's birth, Kakuzawa showed near glee as he grabbed a weapon and killed the escaped Diclonius Silpelit called Number 3. He was also seen to taunt Kurama's first assistant Oomori on more than one occasion.

A leading scientist and college professor at the Kanagawa-area University near Kamakura, he maintained a secret lab in the college's basement. His research into the genetic code of Diclonii led to the creation of a vaccine against their births, which he regarded as a bargaining chip to secure his family as leaders in an all-Diclonius world.

One day, seeking to displace his father in their plans for Lucy, Kakuzawa decides to set her free. He killed all the staff in the Security room, then called the cell phone of one of Lucy's security guards, with the unexpected call surprising them. With their attention off of Lucy, Lucy struck the elevator floor, and the guard holding the phone dropped it within her two-meter radius. When he tried to pick up the cell phone, Lucy grabbed at him with her vectors and finally killed him, taking the cage keys from his body and releasing herself. (In the anime, the guard has already fallen into the cage, so the audience is left to assume Kakuzawa called him before the opening scene). It is this escape that begins the series.

After Kouta and Yuka had brought Lucy, then the amnesiac Nyu, to the class that he taught, he lied and claimed that she was his brother's daughter, and threatened them with kidnapping charges for finding her, but not reporting it. Deceived, they gave her to him and left. He decided to go around his father's wishes and become the 'leader of the new Diclonius race' himself. His decision to sedate Nyu to rape her, though, would prove his undoing, as this awakened the Lucy personality. He revealed that it was he who released Lucy from captivity at the series' start, to begin the cleansing purge of 'ordinary Humans' and showed his horns, as well as the Kakuzawa family history. Disinterested in his megalomaniacal ambitions, Lucy decapitated him with her vectors, telling him she had no need of him. His body and head were found by his assistant, Arakawa, and Kouta, who returned upon remembering his bad reputation, and realizing he had been shown no proof of his claim about Nyu. Arakawa urged him to never speak of what he saw to anyone.

Arakawa later developed his Anti-Diclonius Birth vaccine research to finally perfect it at the series' conclusion, which ironically ended his dream of a world dominated by Diclonii. Even more, ironically, all of his research never revealed that his families' claims of being descended from Diclonii were a racial myth. It was most likely one told by his family members to combat the scorn inflicted upon them for their horns, which turned out to be a simple genetic mutation. He revealed that even the family name, Kakuzawa, which means 'Horn Dale', was because of this peculiarity. The Professor, like his father, hid his horns beneath a "toupee." It is not known whether or not they were naturally bald from an early age or shaved their heads. His remains were buried in the underground grotto that was the graveyard for many of his family members. 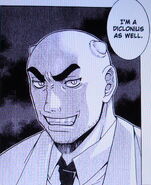 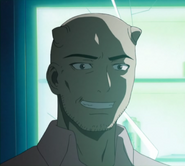 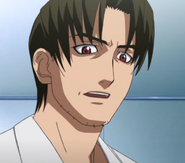 Younger Kakuzawa in the anime. 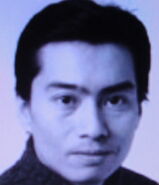