Deputy Director Shirakawa served as a scientist and administrator under Kurama at the Diclonius Research Institute and first appears in Chapter Two. Shirakawa was one of two spies sent by the Japanese government, which at first supported but grew suspicious of the goings-on of the facility, to infiltrate Chief Kakuzawa's inner circle and learn his plans. In the process, she fell in love with Kurama, which may have ultimately led to her death due to the decisions she made regarding incidents involving him.

She and Kurama's personal assistant, Isobe, were given charge over Mariko's mission to pursue Lucy after Kurama's abrupt departure from the Institute and Mariko's killing of Saito. After making sure Mariko understood the peril the bombs inside her posed, Shirakawa remained behind at the island facility to find final evidence of Kakuzawa's hidden agenda. Instead, she realized she had been found out and was sexually humiliated by the Chief before departing, seeking to find Kurama and inform him of what she had learned, in hopes they could stop the Chief's plans.

By the time she arrived in Kamakura, the situation had worsened considerably. Mariko revolted, killed Isobe and seized the cell phone controlling her bombs. Seeking to recover Nana, the childlike amnesiac Nyu had invaded the battle-zone. Shirakawa informed Kurama that Kakuzawa meant, using a supposed satellite launch, to infect the world's population with the Diclonius virus, ensuring that all children born after that would be Diclonius. During this time, she revealed to Kurama that she was the one who advised that Mariko become embedded with internal bombs to make sure she didn't harm any personnel while they used her powers, but secretly, Shirakawa felt jealousy toward the daughter he had with another woman. After a few desperate plans had failed to avert the launch, Kurama attempted to kill Nyu, thus making sure Kakuzawa would lack a major piece of his plan. When all this did was awaken Lucy, Shirakawa sought to give the man she loved a happy ending with his daughter. Grabbing the phone that controlled Mariko's body bombs from a taunting Lucy, Shirakawa tossed Kurama the remote and gave him the code for the shutdown. Lucy casually destroyed the remote and taunted Kurama yet again as she cut off Shirakawa's head. Afterward, Mariko used her internal bombs to attack Lucy, killing herself in the process, but all the explosion did was to knock Lucy's horns off and revert her to her Nyu personality. Nana then fled with Nyu after gaining the blessing of Kurama, and Kurama apologized to Shirakawa's corpse for not being much of a boss before seemingly committing suicide.

Before her death, Shirakawa had uncovered enough of Kakuzawa's plans (implied to have been through sexual favors) for the Japanese government to confirm their worst fears. Since Japanese military and intelligence forces began planning an attack on Kakuzawa's island facility soon after, it can be presumed at least some of her information got through before she was found out. Perhaps based on her identification of key personnel, a second Agent was sent in by Saseba to try and save what information she could when the time to strike came.

There is no mention of Shirakawa being a spy in the anime. She, not Isobe, is the more constrained and somewhat sympathetic character in this version: she's horrified by Mariko's brutal games with the wounded Nana and fascinated by the fact that Nana and Kouta are friends to the point that she urges the armed guards accompanying them to show restraint. She even implores them not to kill Nyu (whom she immediately recognizes as Lucy) since she's "not the target" of their mission after Nyu follows Kouta to the battle scene. Despite her avid protests, Isobe ignores her orders and tells the soldiers present to open fire on Kouta and Nyu. Being fired upon wakes Lucy up, and as Shirakawa approaches Kouta to inform him of Nyu's true identity, Lucy bisects her in the same way as Kanae. Shirakawa's last thoughts are an apology to Kurama, and watching Lucy murder her triggers Kouta into regaining his long since forgotten childhood memories. 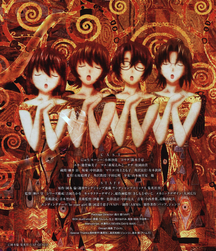 The back of the Japanese Blu-Ray boxset cover. 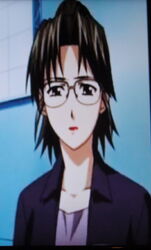 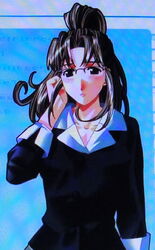 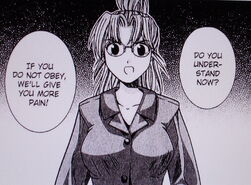