Special Forces for missions of a covert or exceptionally challenging nature

The Special Assault Team, or SAT, is a real-world group of highly trained, elite special police operatives in service to the government of Japan. In Elfen Lied, they are utilized in the service of their country and specifically by the antagonists of the series (who operate for much of the series with government sanction) on the hunt for the escaped main character. As expected, they suffer significant casualties as a result, and one of the series' prime vendettas results from this.

Role in the series

Under the authority of Chief Kakuzawa, they were sent out in pursuit of Lucy, shortly after escaping from the Diclonius Research Institute, despite the team's usage normally being the exclusive province of the Japanese Prime Minister. It is possible that a visiting Vice-Minister seen in the manga's first chapter recommended this authority, but there is no confirmation in-story, and this power may have simply been a sign of the unchecked power Chief Kakuzawa wielded on many levels of Japanese society. Among the team's leading agents was Bando, a top-ranking member of the SAT with a strong sense of duty and obligation. Responsible for awakening Nyu's alternate personality, Lucy, by sadistically attacking her, this lead to his near-demise, loss of two of his arms, as well as the death of his partner Satou. Operatives went to other parts of Kamakura, and their authority included the use of lethal force against her, but not civilians, orders Bando was prepared to ignore. Due to Bando's severe wounding by Lucy, he was compelled to leave the SAT, but before his access terminated, he managed to get his hands on weaponry and materials to continue and improve his odds in his vendetta against her. SAT troops were present for the aftermath of her first battle with Nana, accompanying Kurama and Isobe to the scene. Despite their training and professionalism, the sight of Lucy's dismemberment of Nana and stories of what she had done to Bando caused them to hesitate, unwittingly losing an opportunity to take out a Lucy rendered powerless by Nana. It is not clear if any SAT agents were among those sent out during the final battles involving Mariko, though in both versions specialized soldiers were seen among the support staff.

If SAT officers were among those who invaded Maple House or if they were among the last troops to face the dying Lucy, remains unknown. Most if not all agents in both instances died to a man. It seems possible that those who died at Maple House were of specific employ to Chief Kakuzawa, given their brutality towards the residents, but again this remains unclear.

In the anime's final episode, a group of SAT was again deployed to face Lucy twice. The first time she killed them all while a traumatized Kouta watched. The second time, she was missing one horn, seemingly killed, her second horn seen flying in the air amidst a wave of bullets. Since it is possible that Lucy/Nyu survived this onslaught, the fate of these SAT agents is unknown. 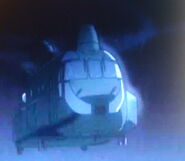 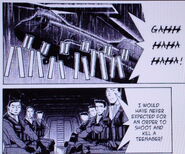 SAT in search for Lucy