Writing Elfen Lied's screenplay
Takao Yoshioka ( 吉岡たかを ) is a screenwriter who wrote the screenplay for the Elfen Lied anime series.

Yoshioka wrote the screenplay for the Elfen Lied anime, and is also responsible for the series composition and script. His job centered on making the plot transition from manga to anime as smooth as possible, allowing for the possibilities of a video version and the limitations of a time-constrained adaptation. Yoshioka had an ending to the anime that focused more on action and featured a more or less decisive conclusion to the events depicted. But at the last minute, this script was put aside in favor of the more dramatic, open-ended scenario viewers are now familiar with.

Other Works as Screenwriter 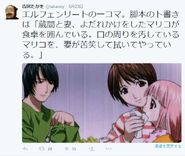 Yoshioka's stage direction to this scene. "Kurama, his wife and Mariko with a bib are sitting around a table. Mariko's mouth surrounding was tainted with foods. The wife wipes the dirty off Mariko's mouth with a wry smile.

Yoshioka's stage direction. "A falling down trycycle. Mariko is crying by the side of it. With an embarrassed smile, Kurama is scratching his head. The wife has a bit angry face.

Yoshioka's stage direction. "An amusement park. Mariko, who looks like a three yaer old or so, ride on Kurama's shoulders. The wife is taking photos of them with a smile.

Yoshioka's stage directions. "Mariko is about to go out for school with a randsel on her back. Kurama and his wife are seeing her off, waving their hands.
Community content is available under CC-BY-SA unless otherwise noted.
Advertisement