Tears Shed for Others

Tears Shed for Others

Arakawa is quickly surrounded by the Clone Diclonii and begins to profoundly regret her actions, thinking that she will see Professor Kakuzawa again in Hell. As the embodiment of her selfish behavior comes at her, feeling she had doomed the human race when she wanted acclaim as its savior, she makes what she believes to be her final wish, which someone recovers the vaccine and kills the Diclonius attacking her.

As their vectors charge towards her, the Vector Attack Craft emerges from the sea and slaughters every last Diclonius on the beach. One of the operatives assigned to pilot it emerges and demands to know whether Arakawa is a researcher or a Diclonius. She then gets on board the craft, with the operative's overcoat offered as cover for the half-dressed Arakawa, whom he mistakenly assumes was sexually assaulted.

The two exchange demands about information until Arakawa learns that the craft is essentially a giant Diclonius. The machine itself is powered by cloned Diclonius nervous system tissue, and created by Saseba, which specialized in vector research just as the late Chief Kakuzawa's facility specialized in virus research.

With the Chief's secretiveness working against the exchange of investigation, Saseba found that vectors, as a rule, made poor weapons, except against the Diclonius themselves, and now made urgent by the spread of the virus. The craft includes a device capable of reversing vector frequencies, canceling them entirely, which the operative claims will enable the ship to take on Lucy, a claim Arakawa finds almost laughable, but that the Operative insists is true. 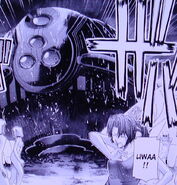 The Ultimate Weapon! Or is it?
Community content is available under CC-BY-SA unless otherwise noted.
Advertisement