Institution of higher education and research

The unnamed University in Kamakura is the so-called "safety school" (a rough equivalent of an American community college) attended by Kouta and Yuka during the Elfen Lied series.

Kouta admits he was attending the university due to his failing the entrance exams of other schools. Yuka, who has always had a crush on him, made grades good enough to allow her to join more prestigious schools but attended the same college to be close to him. It seems likely that the deaths of Kouta's father and younger sister Kanae had an impact on his failing so many college entry exams. However, there's no way to be sure of this since the story doesn't elaborate on whether or not he had difficulty in his schooling prior after their deaths.

During the series, Kouta and Yuka took Nyu with them since she couldn't be left alone at Maple House, as Mayu was also attending school at the time, and the college was the stage where Nyu would meet those who sought to recapture her alternate self, Lucy. The staff at the university included the villainous Professor Kakuzawa, his morally-conflicted assistant, Arakawa. Kurama and his aide, Isobe, also held some manner of importance within the school, and the latter escorted Bando for a fateful meeting after his savage torment inflicted by Lucy. The school also served partly as a front for the Kakuzawas' secret activities, where they maintained a lab. It was there Kouta had several awkward encounters with Arakawa, the last of which unwittingly gave away the secret of Lucy's location.

After the death of Professor Kakuzawa, there is only a brief mention of the school's reaction to his disappearance/death, and as of a late manga chapter, his position had yet to be taken up by another professor, leaving his classes unfinished. It is unknown if Kouta or Yuka graduated sometime during the epilogue, or if the defeat of the Kakuzawas' agenda affected the school. A nearby former department store, once the site of Lucy's initial capture, is apparently later used as offices by some of the university staff as well.

Lynn Okamoto attended a university in Yokohama, which appears to be Kanagawa University ( 神奈川大学 ) based on the photo shown, and it seems likely that his school was the direct inspiration for the university in the series. In Elfen Lied, the location of the school changed from Rokkakubashi, Kanagawa-ku, Yokohama, to Kamakura. While there is a real life university in Kamakura, it is a private women's college named Kamakura Women's University ( 鎌倉女子大学 ), and thus could not be attended by Kouta or any of the male students seen around the college present in both manga and anime. 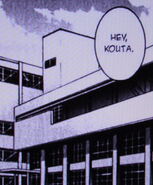 An exterior shot of another of the university's buildings.

The exterior of the university in the anime.
Community content is available under CC-BY-SA unless otherwise noted.
Advertisement