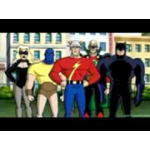 'My name is 'Goji' Rob Morris, and I am older than the average animanga fan, but happily that means I get most of the in-jokes and references without having to be told first. My first loves are Star Trek, and of course, Godzilla, but in 2005 I met a new love. The first time ever I saw her face--she was ripping faces off of other people in the bloodiest ten minutes ever seen in mainstream anime. Early on, the series that could not be predicted had me hooked. Oddly enough, it was Mayu hooked me. First, after Kisaragi, I firmly expected this cute little homeless girl and her sweet puppy to die in the firefight on the beach. Second, her problems are of our world, not SF/F, and one hopes and wishes there might be a Kouta and Yuka for every Mayu. Her mother's insane response to the abuse she suffered cemented this series in my mind. I feel for Lucy/Nyu, so lost in a miasma of hate. I feel for Kouta, wanting to do the right thing while helping girls with deep issues. How can one not feel for Nana, so optimistic and cheerful despite everything--and she has a lot of 'everything'. I even feel for Yuka, whose Tsundere ways seem a bit more understandable than others of her type

Gojirob's Arrogant Suggestions for working on this wiki :

Mind you, you are not at all obligated to even glance at these, but I think they might help.

1 - Keep a character article about that character. Don't get sidetracked in another character's history. If they merit it, create their own article. For example, the iron balls fired at #3 belong in her own article, while Kurama's should just mention that he was concerned about the cruelty of the experiments. Where the other character's actions demand they and those actions be mentioned, be broad or vague in the main article, but specific in their own.

3 - Facts change. If Okamoto-San were to suddenly say that the name Lucy is only about Lucifer, not the Australopithecus fossil, then check your source on his statement and edit away. Misinterpretations abound, characters get confused between each other in memory. If you see in an article that The Unknown Man was part of the assault on Maple House with the Mariko clones in his bag, and you know its wrong, make the edit.

4 - Unlike basic Wikipedia, people who look Elfen Lied up here generally already know something about it, so try and say 'X was attacked by Lucy' and include the link on Kaede to explain who she is, rather than each time explaining who and what she is.

5 - Certain characters just don't have names or have names that need clarification. I only found Isobe after a lot of panel-combing in the manga. The pedophile and killer who assaults Nana and Mayu is called Unknown Man by quite a few fans. The Agent just seemed to fit. Traitor Girl (since amended to Orphanage Girl) is a rougher call, since not everyone agrees she deliberately betrayed young Lucy, but it easily identifies her to casual fans. Same thing with Bakery Merchant and Clone Diclonii. 'Little Nyuu' would have done as well as Nyuu Jr. but some might think 'Little Nyuu' referred to Nyu's childlike nature. Tomoo had a name--his bully pals did not, and they lack an entry because they were just extras, their roles no more distinct than any of the guards Lucy slaughters. I would also argue that certain characters don't rate entries while others do. Take the Bread Lady. She affects the story by enabling Mayu's survival while homeless. She doesn't appear beyond Mayu's origin story, but she is an important part of that, and she helps send Mayu to Maple House when she thinks she has nowhere to turn, thus making Mayu a regular. Also, her presence tells us something about the seaside businesses in Kamakura, thus setting an important look at that world. I would say that by that same logic the woman who claims to have been the true owner of Wanta (I have my doubts after a re-read) does not rate an entry (though I since relented). Had Okamoto-San decided to have her showing up again, constantly trying to get Wanta back, then yes. But she appeared, grabbed Wanta from Mayu, insulted Mayu, and was ditched off-panel by Wanta, never to be seen again. She had no interaction with any other characters, though a woman Lucy kills on the street might be her--same artist, so its hard to tell. Point being, she is covered well enough in Mayu and Wanta's entries, and her impact was confined to the panels she appeared in. For all she really did, Wanta might as well have just scampered off while Mayu slept.

6 - Try and keep subjective opinions or statements out. For example, that the puppy the bullies killed was innocent is beyond dispute, but its also obvious and implicit. Small but not sweeping editorial statements can be placed at the end of an article, but keep them in check. Same for speculation about the characters' post-series fates.

Retrieved from "https://elfen-lied.fandom.com/wiki/User:Gojirob?oldid=41358"
Community content is available under CC-BY-SA unless otherwise noted.